Varadkar and May urge DUP, Sinn Féin to make ‘one final push’

After a series of talks with leaders of Sinn Féin and the DUP at Stormont in Belfast, Taoiseach Leo Varadkar and British prime minister Theresa May say they are hopeful of a deal to reinstate power-sharing within days. Video: Reuters 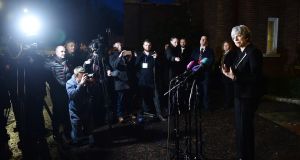 British prime minister Theresa May holds a press conference at Stormont House on Monday. “I have been urging the parties to make one final push for the sake of the people of Northern Ireland,” she said. Photograph: Charles McQuillan/Getty Images

Taoiseach Leo Varadkar and British prime minister Theresa May have exhorted the DUP and Sinn Féin to make “one final push” to strike a deal to reinstate power-sharing in Northern Ireland.

Dublin and London and the DUP and Sinn Féin remained optimistic last night that final differences would be settled to ensure the imminent return of the Executive and Assembly at Stormont, 13 months after they collapsed.

“I have been urging the parties to make one final push for the sake of the people of Northern Ireland,” Ms May said after meeting the leaders of the DUP, Sinn Féin, the SDLP, the Ulster Unionist Party and Alliance.

“I think we are at a point where the locally elected representatives need to find a way to work together to deal with the many pressing issues facing Northern Ireland. I believe we should be able to have an Executive up and running in Northern Ireland very soon,” she added.

Ms May, Mr Varadkar and Tánaiste and Minister for Foreign Affairs Simon Coveney arrived at Stormont at about noon yesterday and engaged in a series of bilateral meetings with the parties in which they exhorted them to seal a deal to reinstate power-sharing.

The DUP, however, did not meet Mr Varadkar. It has until now insisted it would only talk to the Government on North-South matters. It has generally refused to engage in what it says are issues internal to Northern Ireland.

Mr Coveney made light of the fact that there was no meeting with the DUP saying, “I would not read too much into that.”

Mr Varadkar said the differences between Sinn Féin and the DUP were not insurmountable. “We are very hopeful that those two parties will be able to come to agreement this week,” he said.

The one possible concern remains over how the DUP and Sinn Féin will deal with their polarised positions on an Irish language Act. Sinn Féin is demanding one and the DUP is opposing. One senior talks source said it was agreed there would be a fudge of sorts involving three separate Acts dealing with the Irish language, Ulster Scots and broader cultural matters.

Other sources have characterised this element of the deal as three Acts which would be part of a broad sweep of interconnected legislation. The senior talks source said while these Acts would “complement each other” they were separate Acts.

Sinn Féin’s Northern leader Michelle O’Neill, when asked at a press conference if there would be a stand-alone Irish language Act replied, “That is what we have set out to achieve.”

At the same press conference new party president Mary Lou McDonald said Sinn Féin did not believe there was anything “insurmountable left to resolve”.

There will be some anxiety however that any unravelling of what appears to have been agreed on the Irish language could yet jeopardise a deal.

Traditional Unionist Voice leader Jim Allister, who opposes a deal, sought to exploit this issue and sow differences within the DUP.

“It doesn’t matter if the Act is wrapped up with a few tartan bows for the sake of the optics,” he said last night. “What matters is what is actually in the legislation. If, as Sinn Féin demand, it is legislation of substance, then it will be a key part of fusing Northern Ireland into Gaelic Ireland.”

Despite such pressure, DUP leader Arlene Foster also remained positive last night. “We recognise the frustration that is out there but good progress has been made and we will continue to work to look for more progress,” she said.