How did Northern Ireland end up with no government for 13 months? 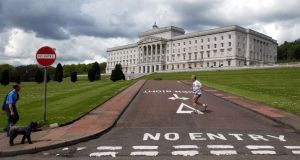 The political edifice at Stormont came tumbling down in January last year when the late Martin McGuinness resigned as Deputy First Minister.

It precipitated more than a year of political deadlock and failed attempts to resolve differences over issues such as an Irish language act, same sex marriage, dealing with the past and ensuring any future return to a Northern Executive and Assembly was secure and sustainable.

But the collapse had been coming for several months before Mr McGuinness made his dramatic move.

And with the Irish language so central to the current effort to end the impasse it began with rows over the language. In September the then DUP Minister of Agriculture Michelle McIlveen changed the name of the fishery protection vessel from Banríon Uladh to Queen of Ulster.

That was viewed as unnecessary and petty but matters escalated at Christmas 2016 when the DUP communities minister Paul Givan announced the scrapping of a £55,000 grant to the Líofa Gaeltacht bursary scheme.

The bursaries were used to allow people from disadvantaged areas attend Gaeltacht course in Donegal.

Around the same time in December 2016 details were surfacing of the scandal of the botched Renewable Heat Incentive Scheme, which could result in the squandering of hundreds of millions of pounds.

The scheme was set up in November 2012 and run by the North’s Department of Enterprise, Trade and Investment when the then First Minister Arlene Foster was its minister. Nationalists argued the buck stopped with her.

Mr McGuinness privately and publicly urged Ms Foster to temporarily stand aside as First Minister pending an inquiry into the scheme, but she wasn’t for moving.

Mr McGuinness’s decision to travel to London in November last year for the unveiling of a portrait of Queen Elizabeth by the Northern Ireland artist Colin Davidson and attended by the queen was viewed as another one of the key moments leading to the crash. Republicans viewed it as a reconciling step too far and made that known to the Sinn Féin leadership.

Mr McGuinness’s resignation in January not only brought down the powersharing administration but led to an Assembly election in March 2017.

The political atmosphere was poisoned even more in February last year when Ms Foster declared, in relation to Sinn Féin’s demand for an Irish language act, that “if you feed a crocodile it will keep coming back and looking for more”.

This triggered an emotional and angry response from nationalism. It galvanised the nationalist and republican vote to such an extent that Sinn Féin was just one seat shy of the DUP after the votes were counted.

Last year there were four attempts to end the political logjam but a breakthrough was not possible although the two parties came close to a deal in November.

Now after this fifth series of talks there is some hope that a deal will be done imminently although with a lot of nervous politicians at Stormont on Monday, particularly DUP politicians, nothing was being taken for granted.