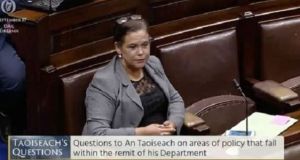 Mary Lou McDonald stopped in front of the Taoiseach’s seat to remonstrate with him before leaving the chamber.

Sinn Féin’s Mary Lou McDonald dramatic exchange with Leo Varadkar on the floor of the Dáil chamber on Wednesday was in response to a clear strategy where she has been targeted for criticism by the Taoiseach and senior Fine Gael ministers.

In a gesture which was described as “very unusual” by the acting chair of the House, Ms McDonald crossed to where the Taoiseach was sitting and became involved in a terse conversation with him before exiting the Chamber.

The incident came at the culmination of testy and confrontational exchanges between Mr Varadkar and Ms McDonald over the course of two days, in which the Taoiseach explicitly accused her of always relying on a script, and constantly hectoring and interrupting at other times.

Sources with an understanding of the Taoiseach’s approach have confirmed it forms part of a conscious strategy on the Government’s part to “call Sinn Féin out” and attack it on its modus operandi in the Dáil.

In particular, Mr Varadkar has consistently alleged Ms McDonald and party leader Gerry Adams rely on scripts for all their contributions, and ignore the response to the questions that are put.

According to the sources, there was a sense within Fine Gael that Mr Varadkar’s predecessor Enda Kenny had not sufficiently taken on Sinn Féin, or representatives of Solidarity-People Before Profit.

The more confrontational strategy is underpinned by the belief that the Taoiseach can more than hold his own with the opposition and “expose empty rhetoric”.

“Even though their politics is totally different, Deputy McDonald reminds me more and more of Marine Le Pen because she always goes back to her script. She delivers a scripted question and when I give her an answer and ask her a question, she goes straight back to the script again.”

He continued the attack on Wednesday after Ms McDonald raised the disclosure that AIB would pay no corporation tax for the next 20 years.

Mr Varadkar responded: “I wish to compliment Deputy McDonald on flawless delivery of your script. Pauses, intonation and everything was absolutely perfect as always. Hope you didn’t spend too much time practicing it this morning.”

In a later exchange when Ms McDonald interrupted a response, Mr Varadkar said: “this is the constant pattern that we see in this parliament. The only time you are not scripted is when you are interrupting actually.

“Is it any small wonder the people of Northern Ireland do not have a First Minister or a Deputy First Minister because this is the attitude of Sinn Féin.

“Constantly hectoring, smart aleck remarks, lack of temperance, lack of respect for other people, inability to listen to them and inability to compromise,” he said.

He added the style of Sinn Féin was interrupting people, shouting them down and showing disrespect for anybody who does not share their view.

Later in the Dáil, Minister for Housing Eoghan Murphy, a very close ally of the Taoiseach, launched a very similar attack on Sinn Féin, again alleging the party’s approach was pre-planned and cynical.

As Ms McDonald stopped in front of the Taoiseach’s seat to remonstrate with him before leaving the chamber, acting chairman of the House, Alan Farrell of Fine Gael, told Ms McDonald that it was “very unusual behaviour” and told her she was disrupting the House.

The Sinn Féin deputy leader was not available for comment. Later, the response from party colleagues was that Fine Gael was hardly in a position to criticise others for relying on scripts as it itself also did so. In particular, the party honed in in on Mr Varadkar’s Marine le Pen remarks which they claimed were hardly spontaneous and smacked of being a training-ground move.

The party’s whip Aengus Ó Snodaigh said Fine Gael and the Taoiseach were themselves no strangers at heckling and hectoring and frequently engaged in what he described as “robust parliamentary debate”.

He said none of the claims made were personal but he said the party would raise the matter at the Committee on Procedure and Privileges (which oversees the conduct of the Dáil) if Fine Gael persisted with this strategy into the future.

A separate Sinn Féin source said the Fine Gael strategy was very similar to the one used against Michelle O’Neill in Northern Ireland, where it was alleged that she also relied on scripted material and was an “empty vessel” for Gerry Adams.

“It is low brow misogyny. In fact, if you go back through the Dáil records you will see the extent to which Mary Lou McDonald has been heckled.

“If it keeps up we will have to address it but as far as we can see at the moment, Leo Varadkar is doing himself a lot more damage by raising it,” claimed the source.