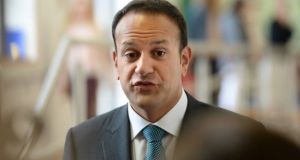 Taoiseach Leo Varadkar said his Government believed in a “culture of aspiration” and wanted to help those who feel “they pay for everything but get little in return”. Photograph: Dara Mac Dónaill

Taoiseach Leo Varadkar has shut the door on any tax incentives for property developers in the budget but has given his clearest indication yet that middle-income earners will see income tax reductions.

Speaking at the annual dinner of the business organisation Ibec on Thursday night, Mr Varadkar said: “We are being imaginative in how we approach the crisis, and we will do all that is necessary to solve it. Build more council houses and apartments; service more development land; make apartments more affordable to build and buy; make it more attractive to let a house or apartment, to name just a few. We will not, however, introduce new tax breaks for developers.”

The Taoiseach said his Government believed in a “culture of aspiration” and wanted to help those who feel “they pay for everything but get little in return”. However, he omitted several lines in his prepared script which said that the Government “does not believe in a culture of dependency and victimhood, where people are down and dependent. Rather we believe in offering people a way up and way forward”.

Mr Varadkar also departed from his script when he told the audience that the higher rate of income tax was not payable in France until someone earned €150,000.

Mr Varadkar emphasised his pitch at middle-income earners in forceful language. He said fostering a “culture of aspiration” is at the centre of his so-called “republic of opportunity”, the phrase he has used in an attempt to define his philosophy.

“This Government believes in hope and aspiration, a better life as something to aspire to, and something to rise up to,” Mr Varadkar said to the audience of 700 business leaders at the RDS in Dublin.

“It’s not something that can be handed down by someone else. The Government can’t solve everyone’s problems for them, and most people don’t expect it to, but the Government and the State can help, and should. It should see itself – and be – an enabler and facilitator of progress.”

The Taoiseach promised during the Fine Gael leadership campaign to give the party a sharper definition, and his speech at the black tie presidential dinner for Ibec will be seen as another effort to do so.

“We believe that work should pay and we want everyone, including those on middle incomes, to gain from the system they fund through their taxes,” Mr Varadkar said. “Too many people feel that they pay for everything but get little in return.”

He again indicated he wants the Government to use whatever scope is available for tax cuts in next month’s budget to raise the threshold at which people begin to pay the higher rate of income tax.

“Where we have scope in the budget, it will be used to reward work and enterprise, and will benefit those on middle incomes and those who pay the highest rates of tax far too soon.

“High taxes that take away 49 per cent of the overtime you do, the extra hours you work, or the pay increase you earned are a barrier to opportunity and to work. They are a cap on aspiration and there should be no cap on aspiration in the Ireland we wish to build.”