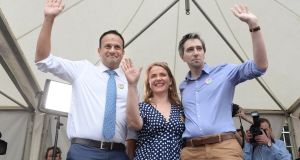 Senator Catherine Noone with Taoiseach Leo Varadkar and Minister for Health Simon Harris at the central count centre for the referendum on repealing the Eighth Amendment. Photograph: Dara Mac Dónaill/The Irish Times.

Until now Fine Gael Senator Catherine Noone was probably best known for her role as chairwoman of the Oireachtas committee on the Eighth Amendment, which paved the way for the referendum legalising abortion.

Her position on the issue moved from being anti-abortion to pro-choice.

The 41-year-old election candidate for Dublin Bay North is in the headlines after saying on the campaign trail that her party leader, Taoiseach Leo Varadkar was “autistic”.

It was not her first brush with controversy. It emerged last month that Ms Noone was the biggest user in the Fine Gael ranks of the Oireachtas free printing service, requesting almost €9,000 worth of material last year.

Earlier that month she proposed a having “positivity seminar” to focus on selecting more uplifting messages for Fine Gael to send out after party members discussed low morale at a parliamentary party meeting.

In 2015, Ms Noone did a U-turn after calling for a ban on mixed martial arts (MMA) after a Twitter storm over remarks in which she described it as “ultra-violent”. She said she had “jumped the gun” and that her comments had been ill-informed and she later called for MMA to be recognised by the Irish Sports Council, saying she was a “big fan”.

Ms Noone told the Seanad last October about receiving a death threat on social media after posting “a positive tweet about the Taoiseach’s polling”.

She said she received “over 100 of the most negative comments” including one that said: “Do you remember what happened to (murdered UK) MP Jo Cox? You should be buried alive with the rest of your parasitic colleagues.”

A native of Claremorris in Co Mayo, Ms Noone is the daughter of a psychiatrist and veterinary surgeon. She studied law at NUI Galway before training as a solicitor.

Her first venture into electoral politics was in 2009 when she won a seat on Dublin City Council in the south east inner city ward. Two years later she was elected to the Seanad on the Industrial and Commercial panel. Noel Rock, who later became a Dublin North West TD, served as her parliamentary assistant.

She stood as Mr Varadkar’s running mate in Dublin West in the 2016 general election. She polled just over 1,000 votes as Fine Gael chased an unwinnable second seat in the four-seater constituency. However, she successfully ran to retain her seat in the Seanad.

Ms Noone has now switched constituencies to Dublin Bay North, where she is running alongside perennial poll topper Richard Bruton, the Minister for Communications. As part of a vote management strategy, he has assigned Ms Noone middle-class areas including Sutton and Howth to canvass in.

Previously a Dublin city resident, her address is listed on the ballot paper as Howth. Unpublished polls have put her at 6 per cent to 8 per cent, which on a good day for Fine Gael and with careful vote management would give her an outside chance of a seat.