US president should be invited to Ireland for St Patrick’s Day to boost tourism, Dáil told 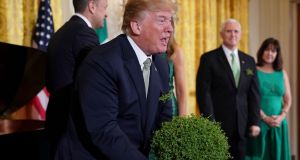 US president Donald Trump picks up a bowl of shamrocks at the White House in 2018. Photograph: Mandel Ngan/AFP

Rather than the Taoiseach going to Washington to meet the US president, the next incumbent in the White House should be invited to Ireland for St Patrick’s Day, the Dáil has been told.

Government backbencher Joe Carey said the invitation should be made in a bid to promote the tourism industry.

The Fine Gael Clare TD made the suggestion during a debate on protecting jobs and supporting business.

The Taoiseach normally travels to the US for the annual White House meeting and to lobby US politicians about Irish interests.

But Mr Carey said a marketing campaign could be built around the 2022 centenary of Ireland’s independence.

He said “we could start by inviting the president of the United States to celebrate St Patrick’s Day in Ireland; landing into Shannon Airport of course.”

Such a marketing campaign would be similar to the one promoting the Wild Atlantic Way and the Gathering during the last global recession.

The US presidential election takes place next month between incumbent Donald Trump and former vice president Joe Biden and Mr Carey suggested an invitation for Ireland’s national holiday in 2022.

Mr Carey also called for supports for the tourism, aviation and entertainment industries. He said 12,000 jobs in Clare depended on tourism and 8,800 were at risk. Mr Carey pointed out that the sector in Clare had taken a hit of €200 million because of the coronavirus pandemic.

Highlighting the impact on the aviation sector he called for a support package for airlines to protect flights between Shannon, the USA and Heathrow.

Proposals on controls for Covid-19 in departures and arrivals should be investigated and incorporated into travel plans especially for transatlantic routes.