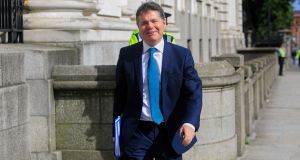 You know they know they’re in trouble when Emergency Paschal is deployed to talk on a non-economic related matter. Photograph: Gareth Chaney/Collins

It’s no big surprise the Government woke up with a severe case of indigestion on Wednesday.

It massively overindulged in waffle at its Covid-19 roadmap launch in Dublin Castle.

Then bit off more than it could chew when trying to communicate a relatively simple message and making a right dog’s dinner out of it.

Sent out too many cooks to sling out a casserole of confusion across the media.

Put the icing on its growing reputation as a custard-pie Cabinet when Ministers got caught up in a comedy of errors in the Dáil.

And most unpalatable of all for Micheál Martin’s Government, forced to stomach having its arse handed to it on a plate by the Opposition when it should have been feasting on the warm approval of a reassured nation, as had been so carefully planned.

This sour dose of reality was primarily down to the mishandling of the message, but it also partly due to unforeseen events well outside the Government’s control. It is nobody’s fault that the Minister for Health was mortifyingly sent home with a sick note and an appointment for a Covid-19 test (negative, thankfully) on the very day of his big Covid prevention set-piece.

It was also somewhat unlucky that the launch of this more general, long-term national strategy coincided with an alarming spike of cases in Dublin.

Unfortunately for a coalition still on the learning slopes, it is already mired in classic “if it was raining soup they’d be holding forks” territory.

Although we now learn that the Taoiseach and his Minister for Health were made aware of the grave developments in the capital in a letter from Ronan Glynn, the acting chief medical officer, last Thursday. In one memorable phrase, he noted Dublin represents “a substantial disease reservoir” which could spread further afield if left unchecked.

Martin didn’t have to be told that. Fianna Fáil is on a 4 per cent popularity rating in Dublin according to the latest opinion poll and he doesn’t want that to go viral.

And then came Tuesday, which turned into a sickener of a day for Micheál and the custard-pie Cabinet. Such were the levels of dyspepsia in Government circles yesterday morning, trolley numbers in the Sick Parrot hospital went through the roof.

Urgent measures were required to calm this volatile situation for the Coalition to soothe the raging fire in the national gullet, to quell the belching from unhappy backbenchers and to ward off a massive explosion of wind from an Opposition still savouring the previous day’s feeding frenzy.

It was time to summon the fluffy artillery. Paschal Donohoe, the Gaviscon Fireman of the Coalition Government.

You know they know they’re in trouble when Emergency Paschal is deployed to talk on a non-economic related matter.

Inside Politics · Beyond the blunders, does this Covid plan make sense?

The Minister for Finance was wheeled carefully into Morning Ireland and Newstalk Breakfast and his valves were fully opened. Suddenly, torrents of softly expanding foam spewed from his dimpled camouflage, enveloping interviewers and listeners with antacid assurances that everything will be grand but you might be as well off cancelling your wedding down the country just in case, thank you very much.

Fianna Fáil’s Michael McGrath, who is Paschal’s understudy, was dispatched to the mid-morning shows to follow up with a comforting dose of sedatives.

By the time Leaders’ Questions came up in the Dáil in the early afternoon, TDs seemed a little tired after all the previous day’s excitement. And maybe Paschal and Michael’s effort helped calm the situation too.

It was a far cry from the mood a day earlier when Leinster House lost the plot after the smooth launch of a clear Covid-19 plan to see us seamlessly into next year went belly-up in a sea of confusion and inconsistency.

The Opposition had a field day, and it wasn’t just to do with the plan. The Taoiseach had to explain that the acting chief medical officer succumbed to a self-diagnosed bout of “over-abundance of caution” when recommending that Ministers immediately “restrict their movements” when Stephen Donnelly announced he had taken a bit of a turn.

They managed to avoid the limelight by returning to their offices and imagining that a big story concerning an unnamed Government politician was about to break, thus melting into the wallpaper the way they instinctively do when word first goes around.

Micheál played down the events which compelled the Ceann Comhairle, acting on advice from senior officials and “not a sudden rush of blood to the head” as he subsequently explained, to initially close down the Dáil for a week because it can’t possibly function without Cabinet Ministers and you couldn’t risk sending in Ministers of State because they break everything.

Right enough, they’re like the monkeys from the Wizard of Oz. But they were allowed in after a few hours anyway, although nobody paid them any attention.

Mary Lou McDonald wasn’t prepared to move on too quickly. She recalled the “shambles” in scandalised tones, lambasting the Government again for promising clarity but delivering “chaos and confusion”.

Not to mention the unfortunate people of Dublin who don’t know whether they’re coming or going.

But the Taoiseach strongly defended the new Covid plan and its flexible system of numbers-based threat levels. In fairness, it isn’t that difficult to understand, even if it looks set to be changed again on Friday for Dublin.

Micheál and his Ministers have been dropping enough hints about it in the last couple of days.

“You chose to deliberately distort and seek to mislead in relation to it,” he told Mary Lou, strongly of the opinion that the Sinn Féin leader does nothing but criticise. (She could write the manual, to be fair.)

But she wasn’t wrong in taking him to task for the lack of clarity in the advice.

“Your words today add to the confusion and anxiety across the country” said Mary Lou, pointing out that his Ministers couldn’t agree on their lines.

“So instead of snapping at me, actually do your job and set the information out.”

Labour’s Alan Kelly was still trying to get over the earlier events.

“Yesterday was one of the most bizarre days we’ve put down here,” he marvelled, before demanding that the Government get its Covid communications act together. To that end, he held up Paul Scott’s very excellent graphic from that morning’s Irish Times which clearly laid out the levels and requirements in the roadmap which weren’t made clear in the bungled launch.

But of course, the Taoiseach will have already seen it as it was “snaffled” by his party and used without credit by Fianna Fáil to trumpet the pandemic plan.

One of the upshots of all the shenanigans was a rejigging of the Dáil timetable, while the action was switched back to Kildare Street and Leinster House from the Liffeyside Convention Centre, where it was supposed to be sitting.

Now, all this week’s votes will go into next week.

Because that’s the way they roll.

Until then, here’s something to cheer up all the Dubs awaiting their fate:

“When things go wrong and will not come right,

Though you do the best you can,

When life looks black as the hour of night

A pint of plain and substantial comestibles such as might be expected to be served as a main midday or evening meal or as a main course in either such meal and will be required to be of a kind for which it would be reasonable to charge not less than €9 – is your only man.

Flann O’Brien must be spinning in his grave.