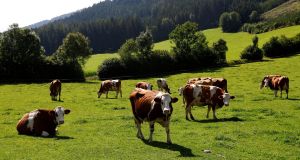 Britain’s decision to introduce a temporary tariff regime in the case of a no-deal Brexit is an “ill-thought out” proposal aimed at breaking European Union unity and frightening Ireland, Phil Hogan has said.

The European Commissioner for Agriculture and Rural Development condemned the British government for proposing to impose “a draconian regime” of tariffs on March 29th and said the contradictions of the proposal “beggars belief”.

“We don’t even know if it’s legal, if it’s compatible with the World Trade Organisation rules,” Mr Hogan told RTÉ’s Six One News. “I think this is an ill-thought out proposal to change the news cycle in London. In the event of a new deal I don’t believe these issues will actually be relevant.

“We don’t expect that there will be any move in the short term in order to impose the type of draconian regime that the UK are seeking to frighten Ireland with today.”

The UK’s proposal for temporary tariffs in the case of a no-deal scenario was published following British prime minister Theresa May’s Brexit defeat on Tuesday. Under the plan, the UK would not apply tariffs on goods crossing the Border into Northern Ireland. However, goods entering the rest of the UK from the Republic would face tariffs.

The new tariff schedule would apply from 11pm on March 29th in the event of a crash out of the European Union and would be in place for up to 12 months.

It’s understood that while 87 per cent of UK imports would face no tariffs under the proposed temporary no-deal plan, tariffs would be high in some sectors and would be a particular threat to the Irish beef and dairy sectors.

Mr Hogan said he did not doubt the support of the European Union for Ireland in the coming weeks, but warned that the Irish beef industry remained “particularly vulnerable”.

“I can assure you the EU stand ready to help our Irish beef farmers in the case of a no deal scenario,” he said. “Hopefully at some stage in the coming weeks the UK will come to reason and not abandon its own consumers who want to see high quality European products – and they want to continue eating good quality Irish beef.”

The Irish Farmers’ Association warned on Wednesday that the proposed no-deal Brexit tariff regime would be “disastrous scenario” for Irish food exports if implemented. “Our most exposed sectors, particularly beef, simply will not survive the kind of tariffs being talked about. This would have a devastating effect in the rural economy,” IFA president Joe Healy said.

“We export over 50 per cent of our beef to the UK. If this is subject to tariffs, it will be a direct hit of almost €800 million on the sector,” he said.