The secretary general of the Department of Public Expenditure and Reform, Robert Watt, reportedly told his own officials that the PAC chairman needed to “control the mob” over the non-appearance of the Government chief procurement officer. 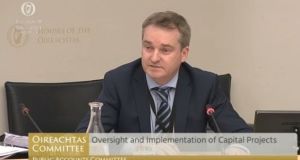 Robert Watt before the Public Accounts Committee on Thursday

The Department of Public Expenditure and Reform turned down a number of requests for meetings on the emerging costs crisis at the planned new national children’s hospital over two months in autumn last year, Public Accounts Committee members have contended.

Secretary general of the department Robert Watt yesterday faced sustained questioning from members about why his department did not respond to the crisis until almost three months after the issue about cost overruns at the facility emerged in August 2018 and despite emails from the Department of Health seeking meetings.

Mr Watt denied his department’s approach had been passive, arguing the Department of Health was only in a position in mid-November to quantify, and fully report on, the overrun.

At a meeting marked by tense exchanges between members and Mr Watt, there was also strong criticism of the absence from the meeting of Paul Quinn, the Government’s chief procurement officer and also a member of the development board of the new hospital.

Fianna Fáil’s Marc MacSharry claimed the department had given a “Harvey Smith” to the committee (a reference to a former champion show-jumper who showed two fingers to rivals).

But Mr Watt said Mr Quinn’s attendance was not necessary to discuss the subject matter of the meeting. Later, Mr Watt remarked on the publicity surrounding Mr Quinn: “I do not believe we will ever get a civil servant to sit on a State board again. For the record, we won’t,” he declared.

Some members strongly criticised Mr Watt for reportedly telling colleagues in his department just before the meeting that PAC chairman Seán Fleming was trying to “control the mob”. He said he did not remember using that phrase but if he had he apologised. Alan Farrell (Fine Gael) said it was “unbecoming” to describe the PAC as a mob.

“We were told about a significant cost issue at that stage,” he said.

“Did it take 10 days for the Minister to tell you?” he asked.

Mr Watt then accepted he would have learned informally about the matter in or around the same time Mr Donohoe was told. But he added there was no point in saying there was a problem unless it could be quantified on paper.

During the exchange, Mr Kelly accused him of showing disdain.

Mr Kelly and Catherine Connolly (Independent) referred to some five emails from the Department of Health requesting meetings: “We have been trying to meet your division since the end of September”, stated one, sent in early November.

“This shows that the Department of Health was desperately trying to contact your office,” said Ms Connolly.

Mr Watt said there were officers dealing with the Department of Health on many issues.

When Ms Connolly asked did the alarm bells not ring, Mr Watt said that when issues regarding guaranteed maximum price were detailed, and that assessment came in, officials from his Department sat down to discuss them.

Bobby Aylward (Fianna Fáil) asked Mr Watt if he had views on overruns in he national broadband plan. “I have views, but any comment I would make would be career ending,” he replied.

Later at a meeting of the Oireachtas finance committee, Mr Watt said it was “pretty clear” what went wrong in relation to the cost overruns at the national children’s hospital.

Mr Watt also said that his department “consistently” raised concerns around the governance and cost of the project going back a number of years.