Killings by British soldiers during Troubles were ‘not crimes’ - Karen Bradley 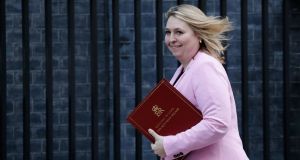 Northern Secretary Karen Bradley made her comments in the House of Commons in advance of next week’s decision by the North’s Public Prosecution Service as to whether any former British soldiers will be charged over the Bloody Sunday killings. Photograph: Tolga Akmen/AFP/Getty Images

The Northern Secretary Karen Bradley has said killings by the British army and police during the Troubles were “not crimes”.

Ms Bradley made her comments in the House of Commons on Wednesday in advance of next week’s decision by the North’s Public Prosecution Service (PPS) as to whether any former British soldiers will be charged over the Bloody Sunday killings.

Responding to a question from DUP MP Emma Little-Pengelly about legacy issues Ms Bradley said, “Over 90 per cent of the killings during the Troubles were at the hands of terrorists, every single one of those was a crime.”

“The fewer than ten per cent that were at the hands of the military and police were not crimes,” she added.

“They were people acting under orders and under instruction and fulfilling their duty in a dignified and appropriate way,” said Ms Bradley.

Later on Wednesday, following criticism, Ms Bradley sought to qualify her assertion. Speaking in the House of Commons a few hours after her original statement, she used a point of order to say that she was expressing a general view rather than referring to any particular case.

“I referred to deaths during the Troubles caused by members of the security forces. The point I was seeking to convey was that the overwhelming majority of those who served carried out their duties with courage, professionalism and integrity and within the law,” she said.

“I was not referring to any specific cases but expressing a general view. Of course where there is evidence of wrongdoing it should always be investigated, whoever is responsible. These are of course matters for the police and prosecuting authorities who are independent of government.”

Tánaiste Simon Coveney is due to meet Ms Bradley in London on Wednesday evening but his spokesman said in advance he would seek clarification of her comments.

“The position of the Irish Government is clear. There should be effective investigations into all deaths during the Troubles, regardless of the perpetrator. That is what is provided for in the legacy framework of the Stormont House Agreement and it is imperative we move forward with its implementation,” the spokesman said.

“In this regard, Secretary of State Bradley’s reaffirmation this afternoon that ‘where there is evidence of wrong-doing it should always be investigated whoever is responsible’ is important.

“There are no amnesties from prosecution provided for in the Good Friday Agreement or any subsequent agreements including the Stormont House Agreement. The Irish Government has been clear that it would not support any proposal to introduce such a measure, for state or non-state actors.”

She said the comments showed “contempt for the legal system, including ongoing court cases into legacy cases involving the British state and its forces”.

“It follows on from comments by the British prime minister indicating that the British government is planning legislation to protect serving and former British soldiers who may have committed crimes,” she said.

“These comments are an insult to families who have lost loved ones at the hands of the British army, state agencies and their proxies in the loyalist death squads which were directed by the British state,” added Ms O’Neill.

“British politicians cannot be allowed to ride roughshod over the legal system,” she said.

He added, “Once again Karen Bradley has exhibited her stunning ignorance about the past. Such comments, albeit always wrong, are particularly insensitive given the Bloody Sunday families await news on whether former British soldiers will be prosecuted for murdering 14 innocent civilians on the streets of Derry.

“Karen Bradley has a responsibility to apologise to families of state violence, as well as setting aside time to read a book on the history of Ireland, “ said Mr Eastwood.

Solicitor John Finucane, whose father Pat, also a solicitor, was murdered by the UDA in 1989 said, “Legally, politically and morally these comments are indefensible, yet is it really surprising to hear a SoS (secretary of state) publicly express the contempt we know the British government had for lives here?”

A review of Mr Finucane’s murder found that a series of positive actions by employees of the British state “actively furthered and facilitated his murder” and that there was a relentless effort to defeat the ends of justice in the aftermath of his killing.

Paul O’Connor of the Pat Finucane Centre in Derry said Ms Bradley had “usurped the authority and independence of the PPS”.

He said that the Northern Ireland Office needed reminding “that a number of prosecutions of former soldiers are on-going, others are pending and her remarks are therefore potentially an unacceptable interference in legal processes that are before the courts”.

“We cannot have a situation where the secretary of state - or indeed any politician - takes it upon themselves to decide whether a killing was a crime or not. That is a matter for the courts to decide based on a thorough investigation of the circumstances and a trial,” she said.

Ms Bradley made her comments on a day when the British prime minister Theresa May said the British ministry of defence was considering introducing legislation to ensure British soldiers were not unfairly pursued through the courts.

Mrs May said there needed to be changes to the current system of investigating the legacy of the Troubles to provide better outcomes for victims and survivors and to ensure that the British soldiers and police officers were not unfairly treated.

The comments by both Ms May and Ms Bradley caused surprise and some anger, particularly as they were made just over a week ahead of the PPS’s decision about the 1972 Bloody Sunday shootings which resulted in 14 deaths.

Lord Saville in his 2010 report into Bloody Sunday ruled all those who were killed by British soldiers during a civil rights demonstration were innocent.

His report opened up the possibility that 17 former British soldiers and two alleged Official IRA members could face charges over Bloody Sunday.

It is understood that the charges that the PPS is considering against the soldiers include murder, attempted murder and perjury.

The comments by Ms Bradley and Ms May appeared to raise questions about what would happen if charges were to be preferred by the PPS against the Bloody Sunday soldiers.

On Sunday the Sunday Times reported that the British secretary of defence Gavin Williamson was considering introducing legislation that would impose a ten-year limit on new prosecutions of British soldiers.

The newspaper reported his stating on Saturday night that the Bloody Sunday case “completely turns the stomach of the British people”, and that the British government “had to do something to make sure our soldiers and veterans have the protection they deserve”.