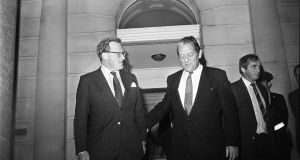 1987 was an election year in both the Republic and in Britain: Charles Haughey returned to the Taoiseach’s office in March and Margaret Thatcher formed her third government in June.

It was also the year in which the Anglo-Irish Agreement was consolidated. For those already working the agreement, the message was clear: business as usual. Even Haughey, who had excoriated the agreement when it had been signed by Garret FitzGerald in November 1985, was widely expected to have no option but to implement what he had publicly accepted was an international agreement.

Haughey cannot but have been impressed by the quality of the team he had inherited to carry through this policy. Many of the public servants on the Irish side had been recruited when FitzGerald had been minister for foreign affairs in the 1970s, and they had flourished as key players in the fashioning of the Hillsborough breakthrough when he became taoiseach.

They had an encyclopedic knowledge of those in Britain with responsibilities for Anglo-Irish policy, impressing many of them by their assiduous homework and fair-mindedness. It had taken years of painstaking work to educate the British elite to the complexity of North-South interdependence and of the merits of formally granting the Republic a consultative role in how Northern Ireland would be governed.

The Hillsborough agreement had FitzGerald’s fingerprints all over it. Its keystone was the inclusion of the consent clause which has ever since transformed North-South relations. This accepted that Irish unity depended on winning the consent of a majority of the population in Northern Ireland. It was this clause which Haughey considered to be heresy for orthodox nationalists.

But the Anglo-Irish Agreement was a process rather than a solution. It had sometimes been likened to a bicycle: it needed constant movement or it might topple over.

The British for their part expressed no alarm about the prospect of a Haughey victory over FitzGerald in the February election. In January, the Northern Ireland secretary Tom King’s parliamentary private secretary, Andrew McKay, told Richard Ryan of the Irish embassy that the attitude toward Haughey within the British government “and certainly in No 10” was “quite positive”.

Thatcher liked “tough nuts” and politicians who “work hard for what they want”. And this was how she characterised Haughey, adding also she found him “attractive”. As for what McKay called the Falklands Factor – which had soured their previous relationship in 1982 – it was “buried”.

There are some important dimensions of any subject which one doesn’t necessarily expect to find in an official archive. The file on Seán Donlon’s resignation is one such. The relationship between Donlon and Haughey had been toxic for many years: each man had publicly humiliated the other. And it was generally presumed it was the prospect of Haughey’s return to the Taoiseach’s office which had precipitated Donlon’s departure in January from his post as secretary of the Department of Foreign Affairs (DFA).

That he would be succeeded by Noel Dorr, returning from the London embassy, was some reassurance to those hoping for continuity in Anglo-Irish relations. Before departing his London post, Dorr had sounded Downing Street as to whether it would be appropriate to include Thatcher in his round of farewell calls. Although told that this was “almost never done”, he was invited to call.

Dorr reported Thatcher as being affable throughout their 35-minute meeting. She had used the occasion to strongly make two points: her commitment to the whole Anglo-Irish Agreement “in all its parts”; and her continuing dissatisfaction with cross-border security. She hoped Dorr would not take this latter preoccupation of hers “too badly – I always say it and I shall go on saying it”.

Among those reading Dorr’s account of this meeting was another architect of the Hillsborough agreement, Michael Lillis, now embedded as the Irish representative in Belfast in the Maryfield secretariat. He told the DFA he had been “particularly struck” by the divergence of evidence between Thatcher’s complaints on security co-operation and “a series of recent indications” to us here “which were laudatory of our side’s involvement”.

Lillis suggested two possibilities: that Thatcher was relying on out-of-date Foreign and Commonwealth Office briefings; or that the Northern Ireland Office was deliberately prompting complaints “to keep the pressure on the Irish Government”.

Dorr’s meeting with Thatcher had been in the room directly above the historic cabinet room in Downing Street. Thatcher mused that had “the people downstairs” divided Ireland differently – she was referring back to 1921 to the Lloyd George Treaty negotiations – “we would have a defensible border by now”.

Despite such occasional historical references, it was well understood by those closely involved that Thatcher lacked, as Dorr put it in his report, any “very deep historic sense” of the complex relations between Ireland and Britain.

But Thatcher remained the British politician with whom Dublin would be dealing. Ryan, reporting from the London embassy after the June election, suggested the “speculative fog” had been swept away and Thatcher had “sailed through, intact and triumphant”.

There seems to have been little appetite on either side for any major Anglo-Irish summit in 1987. But the two leaders could meet in the margins of the twice-yearly European leaders meetings. The secretary of the Taoiseach’s department, Dermot Nally, agreed with the British ambassador, Nicholas Fenn, that the first such opportunity at Brussels in June was important as it could “set the tone for Anglo-Irish relations for years ahead”.

Nally advised Haughey to avoid any mutual listing of grievances as it was “most unlikely to be constructive or cordial”. And after a meeting with Fenn, he added that although Thatcher would be advised “not to go into the specifics”, there remained “no way of telling what she would actually do on the day”.

In the event, the meeting started at 9.30am and lasted a mere 20 minutes, as both leaders were due to start an important European summit at 10am. Thatcher complained the NI situation was “terrible” and that she remained surprised at the scale of unionist disaffection. But it was “not logic but emotion” which governed their actions and she again promised to be “very firm” in implementing the Agreement.

Haughey complimented her stance, contrasting it with Harold Wilson’s capitulation in 1974 to the Ulster Worker’s Council strike against Sunningdale. In comparison, he said Thatcher had made an “historic contribution to Anglo-Irish relations”.

The closing months of 1987 would be dominated by one of the thorniest issues in Anglo-Irish relations: extradition. With detailed agreement in 1986, this was scheduled to be ratified by Dáil and Seanad on December 1st, 1987. The Irish now said the British did not appreciate “just how strong and deep” was Irish feeling on the question.

The Birmingham, Guildford and Maguire cases had “complicated things” – even though none of these cases involved extradition. But the nightmare for any Irish government would be the extradition of any citizen whose subsequent jailing would be challenged as a miscarriage of justice.

In mid-November, Haughey told King the issue had landed him “in deep trouble politically”. Not only were the opposition parties now opposing any ratification of the original text, but he had been advised by Fianna Fáil headquarters that the issue was driving his own party “berserk”.

A compromise amendment was decided on. This required prima-facie evidence of specific charges to be cited in an extradition warrant before it could be entertained. This was anathema to Thatcher but proved to be the only possible political outcome. There was some understanding by British negotiators but it was scarcely surprising when, some few days later, Thatcher put the extradition controversy centre stage at her Copenhagen meeting with Haughey.

She said she was “extremely upset” by the Irish approach. They had taken a step backwards. Her feelings went “deeper than anger”; she reminded Haughey that she could have “got by” without signing the Anglo-Irish Agreement. It had only brought her “criticism and bad blood with the Unionists”.

She showed her exasperation: “Why do I even try!” Haughey flattered her: “Keep trying. You are one of the most able politicians.”

By the year’s end, the issue remained unresolved. But any foreboding that Haughey would be fickle or opportunist on the Hillsborough agreement had not materialised. When British cabinet secretary Robert Armstrong met Haughey in Dublin, he had taken the opportunity to insist the agreement itself was “not up for re-negotiation” – a clear warning to Haughey to forget any hopes of revisiting the consent clause. Haughey did allow that the agreement had delivered “really fundamental changes”. Armstrong described them as “radical” and “irreversible”.

Dr John Bowman is a broadcaster and historian, His latest book is Ireland: The Autobiography: One hundred years of Irish life, told by its people (Penguin)