Timeline: Calleary resignation latest in a series of Government crises and missteps

Coalition has now lost two ministers, and reversed on policy positions and annoyed the public 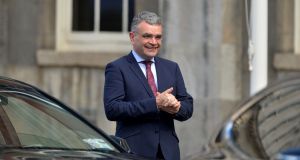 Many governments have had shaky starts but the first few months for this new Coalition has been simply remarkable with almost every week bringing a new controversy, even when the Dail has not been sitting.

Here is a timeline of the most contentious issues from the Government’s first few months.

Calleary and the golf event

August 21st: Minister for Agriculture Dara Calleary resigns after attending an event at Cliften, Co Galway, organised by the Oireachtas Golf Society earlier in the week attended by more than 80 people – in apparent violation of Covid-19 restrictions.

The event is understood to have involved a golf competition followed by a dinner in the Station House Hotel.

Since late June, indoor gatherings have been restricted to 50 people under the Government’s public health controls. Further restrictions announced identified only weddings and artistic and cultural events as being allowed to have groups of up to 50.

The event came one day after the Cabinet tightened Covid-19 restrictions in a bid to curb a surge in cases.

July 3rd: Within the first week of the new Government being formed it faced its first major controversy and one that led to the sacking of a Minister.

It was reported that Barry Cowen, the new Minister for Agriculture, had received a fine and a ban for drink-driving while holding a provisional licence. It was an embarrassment but after a few difficult days for the government the issue appeared to have settled down, following his apology.

However, the following weekend, it emerged that a Garda Pulse record suggested he had tried to avoid the checkpoint.

Mr Cowen strongly denied this but the pressure did not relent. Mr Cowen then decided under legal advice not to make any further comment.

Taoiseach Micheál Martin told him that he would have to face more questions in the Dáil. Mr Cowen refused he was fired on Tuesday July 14th.

July 21st: Following a week of confusion, the Government finally publishes its ‘green list’ of 12 countries and territories. Passengers originating from those places will not have to undergo quarantine in Ireland. The Government is accused of sending out mixed messages, telling people not to take unnecessary trips abroad while at the same time stating that they can travel abroad to these places.

July 22nd: The Government gets involved in a crisis all of its own making. There are three super junior ministers in Government but the legislation only allows for two of them to get paid at a higher rate. Rather than state openly that it intends to allow the third junior bridge the €16,000 pay gap, the Government says nothing but tries to bring the change in through an amendment to another piece of legislation. It is picked up by the media and leads to a huge controversy.

July 23th: The Greens had gone through a very intensive and divisive debate over whether to enter government. This debate had a postscript when Catherine Martin ran Eamon Ryan to with 45 votes in a surprisingly tight leadership contest. Mr Ryan survived but it laid bare the divide in the party.

July 23rd: Independent TD Catherine Connolly becomes the new Leas Cheann Comhairle of the Dáil after a shock victory in a secret ballot over Fine Gael candidate Fergus O’Dowd. The result marked the first Dáil defeat for the Fianna Fáil-Fine Gael-Green Party coalition and is seen as an embarrassment given its majority in the House. An estimated 15 Government TDs voted against Mr O’Dowd.

July 24th: Amid resignations of high-profile Green Party members including Saoirse McHugh, a new left-wing group, Just Transition Greens, is formed which is affiliated to the party but might end up becoming a breakaway.

July 24th: It emerges that people were being stopped in airport by social welfare offices and garda and asked for PPS numbers. Those who were in receipt of the Pandemic Unemployed Payment of €350 per week having their payments docked if they were travelling out of the country. The practice, which had been introduced in early July, necessitates a series of embarrassing U-turns.

July 28th: The Government announces a collective 10 per cent cut in salary in a bid to draw a line under the junior ministers’ pay row and insists that was planned in any instance. It still looks bad. The three junior ministers then say they will share the present allocation for two ministers between the three of them. This row takes much of the attention from the launch of the Government’s €7.4 billion stimulus package.

July 29th: The Taoiseach announces a review of the 104 cases where people travelling overseas had payments stopped. Then the Government decides that it will allow those receiving PUP to go on holidays to ‘Green List’ countries without losing their weekly payment. There is more than a nuance between the positions of Fine Gael and Fianna Fáil on this issue.

July 30th: Just when it seemed that everything had settled down, the Greens throw another spanner in the works when its Dublin Central TD Neasa Hourigan votes against a Government Bill to extend protections to tenants whose income has been adversely impacted by Covid-19.

The situation is compounded when her colleague, Dublin Fingal TD Joe O’Brien abstains. His status is different to Ms Hourigan’s in that he is a Minister of State abstaining on a Bill sponsored by his own Government. Traditionally a Minister of State is bound to the concept of collective Cabinet responsibility.