Arlene Foster insists there is no threat to her DUP leadership 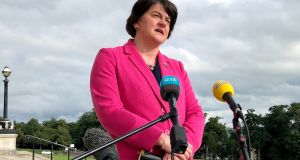 First Minister Arlene Foster has insisted there is no threat to her leadership of the DUP after eleven of the party’s 27 MLAs defied her wishes in a vote in the Northern Assembly on Monday.

While the Bill was comfortably passed with the support of other DUP MLAs, Sinn Féin, the SDLP and Alliance several DUP members demonstrated their concern by abstaining on the vote.

It was also reported that senior DUP figures, former deputy leader Nigel Dodds and MPs Sir Jeffrey Donaldson and Sammy Wilson, advised her to pause the legislation to iron out any technical problems with it.

The main concern, as expressed by a former DUP special adviser Richard Bullick, was that the Bill would allow individual Ministers take “solo runs” on significant and controversial issues rather than having to refer them to the full Northern Executive.

Ms Foster was adamant that she had solid legal advice that any such matters must be referred to the Executive. Nonetheless eleven members took Mr Bullick’s rather than her advice on the matter.

On Thursday evening Ms Foster gave an interview to the BBC and UTV where she said she understood why some of her party had concerns.

But she rejected these anxieties by saying her colleagues did not have access to the legal advice she had received. “I have access, because of my role, to the rigorous assessments that have been carried out in relation to this legislation. The fact (is) that I have a broad range of legal opinion available to me in my role. Others do not have access to that and I acknowledge that,” she said.

“I don’t see it as a threat to my leadership when people express opinions; I welcome that actually. Colleagues abstained, they did not vote against the Bill, and I think it is important to acknowledge that,” she added.

Ms Foster said the legislation actually was designed to “plug the gap” whereby individual Ministers could take decisions on significant and controversial matters without reference to the Executive.

She planned to contact each DUP MLA individually to explain the situation.

Ms Foster said that no one had expressed any concerns to her or to any of her senior colleagues about her leadership. “Certainly there is no threat,” she said.

Ms Foster said it was not a case of the eleven MLAs defying the whip as there was no whip imposed because it was very clear the legislation would be passed. “That is why I think some colleagues felt they could abstain at this time,” she said.

Ms Foster said that Mr Bullick, who was her former chief special adviser and now works in the private sector, had not communicated his concerns directly to her. “He felt he had to go public and that is a matter for him,” she said.