Patrick Smyth: Officials insist no sign of divisions opening up in ranks of the EU27 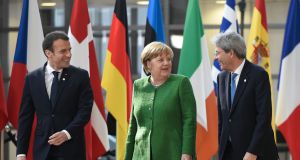 Brexit was not on the agenda of yesterday’s informal EU summit. But its implications were everywhere – in discussions over the post-Brexit budget, and in backstage talks about where exactly the UK is going.

German and Dutch sources reported bewilderment on the part of their respective leaders after meeting Theresa May recently. Neither received any kind of clarification from the British prime minister about the broad direction she intended to take.

The German source said May had been described by one participant as appearing powerless to take decisions. And the drift in London is not encouraging a sympathetic softening of attitudes to the UK’s “problems”.

Irish diplomats and Commission officials insist there has not been any sign of divisions opening up in the ranks of the 27.

Specifically, Irish sources remain insistent that the commitment of the 27 will be shown in the tough language about the Border that is expected in the draft text of the commission task force’s Withdrawal Agreement, due to be published next week.

It will be no more, they insist, than an expression of the undertakings given by the UK in December and will be seen as such by the 27, who are determined not to see any “backsliding”.

For the first time Council president Donald Tusk’s office has also spoken of the possibility – indeed the likelihood – that the guidelines for the next phase of talks, the future relationship, will be drafted for the March 23rd summit without waiting for a UK position paper which may never come.

The UK position continues, frustratingly, to emerge in dribs and drabs in speeches. And what is emerging is being dismissed by the task force and EU diplomats as unacceptable “cherrypicking” – the idea that the UK will be able to pick and chose which bits of the EU market that interest it.

The latest elaboration of the UK position on trade relates to regulatory alignment, a concept central to both the Border deal and to any hope of an agreement on a future relationship. The UK is suggesting a “three baskets” approach – aligning fully with EU rules in some areas, seeking regulatory “equivalence” in others, and going their own way in others.

That view was elaborated this week in relation to the North by Brexit minister Robin Walker, who said the fallback option on the Border – what the UK has committed to in the absence of any overall deal with the EU – “is not talking about full alignment, or taking EU rules across the board”. Instead, it was only those areas agreed as underpinning North-South co-operation or the Belfast Agreement. He added that the full alignment would be “outcomes based” rather than “rule-taking”.

Diplomats and officials in Brussels are adamant that attempts to redefine “full alignment” in this way will simply not wash. The publication of the proposed language on the Border in the Withdrawal Agreement will, they say, be a real test of how willing the UK is to honour its undertakings – crucial to any agreement to proceed to the next phase of discussions. Even if that means biting the bullet to reconcile such undertakings with mutually contradictory positions.

No one is holding their breath.