‘There’ll be no problems’: A Border farmer for no-deal Brexit

‘We’re in a far better position than our neighbours’ in South, says Tyrone unionist 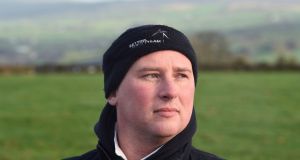 Larry Rogers: ‘There’ll not be a [hard] border, no chance, because it’s just not feasible. Nobody wants one, nobody needs one.’ Photograph: Trevor McBride

From the top of his farm in Victoria Bridge, outside Strabane, Larry Rogers can see three counties: Tyrone, Derry and Donegal.

The beef and dairy farmer is a staunch Leave supporter when it comes to Brexit and is adamant that the best thing now for the UK would be to depart the EU without a deal.

“On [March] 29th we need to go out with no deal because if we go out with no deal, that’s it, job’s done,” he says. “The European union was about friendship and trade but they’ve gone for control of everything. They want to form one country, and I’m against federalism.

“We wanted independence, so we’ve got to go out under World Trade Organisation [WTO] rules so [the EU] have no control whatsoever over the UK and our markets.”

Rogers’s view is at odds with that of the Ulster Farmers’ Union, which warned last month that a no-deal Brexit would have “catastrophic consequences” for the North’s farming industry.

Will they put tariffs on agricultural products if there’s no-deal? That’s down to the EU

“The world will not come to an end,” says Rogers. “There will be maybe a year of readjustment.

“You see all these warnings of jobs going and this, that and the other – well, jobs have always been going, but jobs always come back too, and jobs are always being created.

“Is anybody going to wake up the morning after Brexit and go, ‘Oh no, we’ve left the EU?’ There’s been a lot of scaremongering, but I guarantee everyone will wake up, have their cornflakes and go to work as usual. It’ll be fine. There’ll be no problems.”

Tariffs ‘down to EU’

Rogers is one of many farmers in the predominantly rural county of Tyrone. The beef from his farm goes to Omagh for processing and is then shipped to England; most of his milk is sold to Fivemiletown Creamery in south Tyrone, which supplies major Irish dairy firm Glanbia.

“I was talking to our milk driver. He was delivering to LacPatrick for a while, and Cookstown and Virginia, which is across the border in Cavan.

“Will they put tariffs on agricultural products if there’s no-deal? That’s down to the EU.”

Rogers’s farm is only a few miles from the Border. He has family and friends in Donegal and, like many northerners, buys his diesel in the Republic and crosses the Border at the weekend to go to the beach or for Sunday lunch. He insists none of this will change because of Brexit.

“Let’s sort the hard border issue first,” he says. “There’ll not be a border, no chance, because it’s just not feasible. Nobody wants one, nobody needs one.

“If the UK as a sovereign nation says we’ll have no border checks, there will be no border checks. They’ll say in Europe that they must be able to track goods and check goods coming in because the UK isn’t part of the EU any more, well that’s okay, but it can be done electronically.”

Rogers proposes several options, including a system of trusted companies, checks on point of dispatch or point of arrival, and an office – away from the Border – that would handle paperwork and documents via email.

“They will find a way; there is always a way.”

A hard border, if it comes, will be imposed by the EU, not by the UK, he adds.

“If the EU says we need a checkpoint on the Border, and Britain says we’re not putting one up, well they’ll have to put it up.”

Rogers’s family has farmed this land since his grandfather bought it in 1946. His maternal grandmother came from Donegal, and his father grew up on a farm along the river Foyle, which for much of its length marks the border between North and South.

They’re trying to make part of the UK different from the rest, which is not fair

“They used to smuggle cattle by swimming them across, but my father couldn’t swim so he used to hold on to the tail of the cow and let it swim across,” says Rogers. “Of course, there were also customs men, and I think he got caught once or twice, but sure what odds.”

Some £277 million was paid to Northern Irish farm businesses in 2017 under the EU’s Common Agricultural Policy (Cap) subsidies. Rogers would be happy to see such payments phased out.

“I’m a small businessman. No other small business would be supported like that. Just get on with it. Do it. If you can’t turn a profit do something else.”

A British citizen and a unionist, Rogers is no fan of UK prime minister Theresa May, who he says is “wishy-washy, weak”.

He votes for the DUP but does not agree with “them on a lot of things”, although he does support the party’s opposition to the current EU-UK withdrawal agreement.

“They’re trying to make part of the UK different from the rest, which is not fair,” he says. “The deal a disgrace, it binds us in to the EU. Even if the backstop was taken out, the DUP needs to say ‘No, this is not a good deal.’

“At that point the Irish Government will come and say, ‘Right, we need to do a deal,’ and the EU will do a deal. But at the moment the EU are holding a gun to our heads.”

Even so, Rogers is optimistic about the future.

“There will be a lot of upheaval, but Brexit will happen, and I think we’re in a far better position than our neighbours across the Border.”