Tensions in CervicalCheck over telling women of test errors revealed 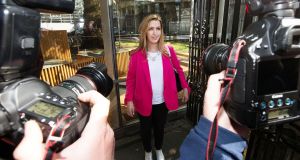 Vicky Phelan arriving at the Dail prior to her appearance before the Public Accounts Committee on Wednesday. Photograph: Nick Bradshaw

Doctors treating women with cervical cancer told CervicalCheck in September 2017 that they were being “put at a disadvantage” in deciding who should or should not be told about false negative smear tests.

Minutes of a meeting between the screening programme and clinicians treating patients aimed at resolving a row over communicating the results of a clinical audit were disclosed to the Dáil Public Accounts Committee.

It is the first time that details of this meeting have been aired in public.

Ultimately, the meeting did not resolve the issue of whether women would be told and it emerged last month at least 162 women were told not informed about the clinical audit that showed false smear test results.

The meeting on September 1st, 2017, attended by nine doctors - all members of CervicalCheck’s “lead colposcopists group” - reveals the tensions around the year-long dispute between CervicalCheck and the doctors over informing women about past incorrect smear tests.

Among the attendees at the hour-long meeting was Dr Kevin Hickey, the Limerick gynaecologist treating Vicky Phelan, the woman whose court case brought to the controversy to light last month.

Ms Phelan sued over a false negative smear test in 2011 that, three years later was found to be incorrect. The Limerick women was not told about the false test until September 2017. She was diagnosed with cervical cancer in 2014 and is now terminally ill.

At the September 2017 meeting, there was a “robust discussion” between CervicalCheck and doctors around the communication of cancer audit results to women diagnosed with cervical cancer, the minutes say.

The meeting heard that the “perception that putting the onus on the clinicians to initiative the conversation [with affected women] was not correct and caused a deal of concern and negative feelings towards the programme from clinicians,” the minutes state.

There was “a general consensus” at the meeting that CervicalCheck should let women know prospectively about the process around the time of diagnosis and “if appropriate communicate directly to the woman when the outcome was available.”

“In the absence of clarity regarding the assessment of harm that clinicians were being put at a disadvantage when deciding who should and should not be offered a close-out meeting,” the minutes state.

Dr Gráinne Flannelly, the then clinical director of CervicalCheck, expressed “regret for an negative impact of this process and explained the evolution of the process from being primarily for the purposes of quality improvement and education,” according to the minutes.

The director, who has stepped down last month over the controversy, told the doctors that “mindful of the need for prospective notification for the process to women, the programme has been preparing an information leaflet to be given to women following the diagnosis of cancer.”

The minutes state that the Cervical Check and doctors decided that audit results should not be directly disclosed but the women should be given the choice about whether they wanted to be told about the results.

“Given that this can also be stressful and anxiety-producing event for women, it is useful to give women a choice as to whether they wish to be alerted when the results of the review are available or not,” the minutes say.

“CervicalCheck is required to review the screening history of women diagnosed with cervical chancer however, it is planned to put in place an opt-in system where the woman can let CervicalCheck know whether she would like to receive the results of the review at a later date irrespective of the outcome.”

The screening programme and the doctors agreed to “work up the leaflet(s) and changes to the process.”

There was a general agreement at the meeting about communicating the audit results that “this was a stressful area particularly when women were unaware of the process and the possibility of an outcome.”

“In addition, risks regarding the possible misunderstanding of perceived failures of the test representing a screening incident (where trends are identified) as opposed to the known limitations of screening tests (no trends identified between individual service providers),” the minutes state.

One doctor, Dr Edward Aboud of Letterkenny General Hospital, suggested “increasing women’s knowledge about the benefits and limitations of cervical screening, particularly that all cancers cannot be prevented even with the introduction of HPV primary screening and the HPV school vaccination programme.”

Another, Dr Tom D’Arcy of the Coombe Hospital in Dublin, remarked on the “difficulty of communicating complex information of this type to women with diagnosed with cervical cancer.”

“Members agreed that the vast majority of patients do not wish to hear the nuances and complexities but wanted the information simply and honestly including advice of where to receive any other relevant information,” the minutes state.