No new infrastructure or cameras for Border post-Brexit, says Bradley

Northern Secretary Karen Bradley said on Wednesday that there would be no new cameras on the Border after Brexit. Video: Parliament TV 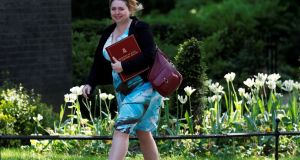 Northern Ireland Secretary Karen Bradley has ruled out any new infrastructure, including cameras, at the Border after Brexit, telling MPs that her government wanted to ensure there is no change to the lives of people living there.

Ms Bradley told the EU scrutiny committee that she kept an open mind on both customs options under discussion by Theresa May’s cabinet, but suggested the technological solutions known as maximum facilitation or “max fac” would be less suitable for Northern Ireland.

Ms Bradley said a proposed customs partnership which would see Britain collect tariffs on behalf of the EU had advantages for Northern Ireland. “There’s no doubt that new customs partnership, the hybrid model, makes the Northern Irish Border easier. It is resolved in an easier way than maximum facilitation,” she said.

The cabinet is divided over the future customs relationship with the EU amid talk of a third option known as “max fac plus delay”, which would see the UK remain in alignment with the customs union until technological and administrative solutions are in place.

Ms Bradley said Northern Ireland’s situation was unique, and that security concerns made any new physical infrastructure on the Border inappropriate.

She declined to criticise recent statements by Minister for Foreign Affairs Simon Coveney, which veteran eurosceptic Bill Cash condemned as provocative. But she said the British government wished to find a solution to the Border which would not require a backstop arrangement to be triggered.

“We don’t want the backstop to happen. We want to solve the issue of the Irish border through the overall EU/UK relationship. Option B is that we resolve it through both the UK/EU relationship, but with specific provisions for the unique circumstances of Northern Ireland.

“The backstop is not where anyone wants to be,” she said.

The House of Lords EU home affairs sub-committee heard from Robert Hannigan, former director of government communications agency GCHQ, that most of Britain’s arrangements for sharing signals intelligence in Europe were governed by bilateral arrangements.

“I don’t see a security treaty having much effect on that. That ought to continue untrammelled, except that the way we the UK as an external party deals with national security will now become a factor in the judgment of adequacy for the much bigger data sharing treaty,” he said.

Former MI5 director-general Jonathan Evans said Britain contributed more intelligence to its EU partners than any other member-state, but that engagement with its European partners on national security matters was “extremely important”.