Independents seek support for a challenger to Michael D Higgins 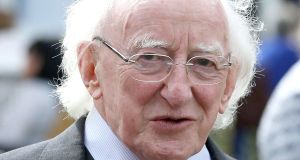 President Michael D Higgins has confirmed he is to offer himself for a second seven-year term in Áras an Uachtaráin. Photograph: Brian Lawless/PA Wire

Independent members of the Oireachtas are attempting to harness support from members of the Dáil, Seanad and county councils as they seek to field a presidential competitor to Michael D Higgins.

Mr Higgins officially declared yesterday that he would nominate himself for a second seven-year term in Áras an Uachtaráin and would stand as an independent candidate in an election now likely to take place in October.

His announcement was followed by the first serious co-ordinated efforts among Independent TDs and senators to nominate a rival candidate. In order to get on the ballot paper, a candidate must have the backing of 20 TDs or senators, or secure the support of four county councils.

Fianna Fáil and Labour have already declared their support for Mr Higgins, and Fine Gael is expected to follow suit on Wednesday. Sinn Féin leader Mary Lou McDonald has indicated she wants to stand a candidate, and the party’s national executive will decide its approach this weekend.

Seán Gallagher, who came second to President Higgins in the 2011 election, yesterday wrote to all local authorities and asked them to facilitate the entry into the race of aspirant candidates.

Mr Gallagher did not say if he intends to stand himself. Alongside Mr Gallagher’s appeal, Independent Roscommon TD Michael Fitzmaurice wrote to all non-party members of the Oireachtas asking them if they intend to sign any nomination papers. This would be the first step in potentially reaching consensus on a single candidate emerging from the Dáil and Seanad to challenge Mr Higgins.

“Once we have established that we have 20 who would be willing to sign, then we can determine who they would be favouring,” Mr Fitzmaurice’s letter said.

In advance of a Fine Gael parliamentary party meeting to discuss the issue, Taoiseach Leo Varadkar praised the “fantastic job” done by President Higgins. He said Mr Higgins’s “advice, wisdom and clarity” had been “really valuable”.

“He has done a really good job representing Ireland abroad and he always conducts business with respect and dignity.”

Mr Fitzmaurice also told The Irish Times he would be appealing to Independent councillors to help schedule meetings to consider the pitches of potential candidates. This process could prove difficult, however, given the dominant position of the main parties on local authorities.

“This isn’t about political parties, this is about providing people with the opportunity to run for something if they want to. It is about democracy.”

Outlining his intentions, Mr Higgins – who initially said he would serve only one term – said: “If I felt I couldn’t do this job with energy, and to get the kind of response I have been getting, I wouldn’t be doing it.

1 Former Kilkenny hurler dies after bike struck by tractor
2 Green Party’s Catherine Martin confirms she will stand against Eamon Ryan
3 Donald Trump’s political success is based on racism
4 Pubs reopening will not mean ‘fellas having a few pints and peanuts’, Holohan warns
5 Hundreds protest outside US embassy in Dublin over George Floyd death
Real news has value SUBSCRIBE