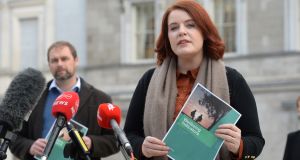 A Green TD who opposes the proposed EU-Canada free trade deal has said there should be a long postponement of its Dáil ratification vote to allow a full debate within her party.

Dublin Central TD Neasa Hourigan is one of two Green Party TDs, along with Patrick Costello from Dublin South Central, who have threatened to vote against the EU-Canada Strategic Partnership Agreement, known as CETA, if it goes before the Dáil.

A vote to ratify the accord was scheduled to take place this week. Following indications over the weekend from the two TDs that they would vote against the Government, it has been rescheduled until January to allow for “longer and more considered debate”.

Ms Hourigan said yesterday it has long been Green Party policy for it to actively oppose ratification of CETA. She said the party has argued it could have a significant negative impact on Irish agriculture and business.

Senior party figures, including leader Eamon Ryan, spoke against aspects of the deal when in opposition.

She also said that a deferral until January would not give the party sufficient time to debate the issue and hold a special convention to agree the party’s position.

“I would personally like to hear debates in Germany Italy and France. Eleven countries have not ratified it. There should be no time push on this . . . we do not have to rush it through,” she said.

The issue has restoked some of the internal tensions within the Green Party which surfaced during government-formation negotiations, with divisions over the party’s current position.

One provision in CETA that has caused much difficulty is for investor special tribunals that sit outside national court systems and focus on investor needs. Those opposed to CETA have claimed such tribunals can supersede the powers of national courts.

Mr Ryan has said he will campaign to ratify the agreement. He acknowledged that he had previously campaigned against such deals but that the situation had evolved dramatically. He instanced a European Court of Justice ruling that CETA was subservient to EU public interest law.

They say that language emphasising the primacy of the 2015 Paris accord on climate change was specifically included as a reference to CETA.

Sources within the party believe it will be difficult to resolve the issue and that both sides are on a collision course, irrespective of when the vote is taken.

“We cannot change CETA. But what has been done by European Greens has alleviated most of the more challenging provisions,” said Senator Pauline O’Reilly who will vote for ratification.

“I do agree that we do need to allow debate within the party. If I am convinced that more time is needed I am happy to give it.”