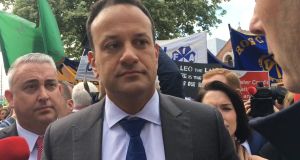 Taoiseach Leo Varadkar: ‘The only thing I said was there were different accounts’. Photograph: Michelle Devane/PA Wire

Taoiseach Leo Varadkar has said he regrets if he struck an adversarial tone when saying he was not sure if claims about Waterford mortuary were true or not.

Mr Varadkar said he never specifically challenged the views of four pathologists at Waterford University Hospital who criticised the poor condition of the mortuary storage and refrigeration facilities.

They said dead bodies had been left lying on trolleys at the hospital, leaking bodily fluids onto corridors and making closed-coffin funerals unavoidable in some cases.

Earlier this week Mr Varadkar said he was not sure if the claims were true and referred to there being “no evidence” to support the claims.

Speaking at the unveiling of Fine Gael local and European election campaigns in Moate, Co Westmeath, on Friday, Mr Varakdar did not withdraw the remarks.

The Taoiseach said all he had done was point out two different accounts of conditions in the mortuary: one by the consultant pathologists, the other by hospital managment.

“The only thing I said was there were different accounts, and I did not want to be calling any staff member dishonest or questioning the veracity of what they said.”

Mr Varadkar added it was universally accepted the morgue facilities needed to be upgraded as they was substandard.

After being asked if his comments had an adversarial tone and would discourage whistleblowers to come forward, the Taoiseach said he always encouraged people to be open and honest in what they say.

“If that is the tone that I struck or it came across that way I regret that. I have always encouraged people to raise issues if they have issues,” he said.

Mr Varadkar has come under sustained criticism in the past few days for the remarks from other political parties. On Friday morning Labour leader Brendan Howlin accused him of Trumpian tactics by disparaging as false the truths that were inconvenient to him.