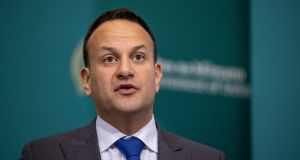 Leo Varadkar said that Ireland is the first country in Europe to go back into a national lockdown, but that a “preemptive strike” was needed against the virus “before it is too late”. Photograph: Tom Honan/Julien Behal

A six week period of Level 5 restrictions will cost the exchequer in the region of €1.5 billion, and cost some 150,000 jobs, the Tánaiste has said.

Asked about the financial impact of the measures, the Taoiseach said they would be funded by borrowing, but acknowledge that the long term impact was significant. “We can do it this year, we can do it next year. We need a vaccine next year,” he said.

However, Minister for Business Leo Varadkar said that those figures could be impacted by the failure of businesses, which would also affect tax revenues. Mr Varadkar told business leaders that they had done “nothing wrong” in recent months. “In fact, you’ve done everything right,” he said, adding that the decisions taken last night were driven by a “need to reduce interactions that occur between adults and different households”.

Mr Varadkar said that Ireland is the first country in Europe to go back into a national lockdown, but that a “preemptive strike” was needed against the virus “before it is too late”.

He asked that commercial landlords give tenants “a break” and stick to a recently published code of conduct.

The Tánaiste said the fear in March was that there would be a second wave, and it would “come at the worst possible time: the winter.” However, he added that the change was “not inevitable” and that by sticking to restrictions, “we can make sure the second wave is only a ripple”.

However, Taoiseach Micheál Martin said he said he thought Covid-19 would be with the country for the entirety of 2021. He said the Government intends that the country will go into Level 3 on December 1st, when the new period of restrictions expires.

“We may well get the levels down, but don’t rule out going back up again”. He said that when restrictions were first relaxed, “we got a reasonable stretch”. He said if we “behave ourselves reasonably we can look forward to a reopening”, adding “until we get a vaccine there is no magic solution to this”. He said that judging the response to the pandemic “is not an exact science and I think we have to be very clear about that.”

He said moving to Level 3 was “absolutely worth giving a shot”, and reiterated his view that the country was not ready to move to Level 5 when it was first called for by Nphet.

Mr Varadkar said it didn’t seem that Level 3 measures had the desired effect in Dublin. He defended his recent criticism of Nphet, saying he thinks “(it) was valid at the time. I don’t think any government body should be above criticism,” he said.

Asked if he could guarantee that schools would be kept open, Mr Martin said that “nobody can guarantee anything in life… but we will do everything we possibly can.” He said that the advice from Nphet was that schools are seeing very low transmission rates and that they are “safe places”. He said he acknowledged the current situation is “challenging” for teachers “and I applaud what they’re doing”. He said more resources would be provided “to ensure that schools are able to continue to open”. He said it was vitally important to keep children in schools for developmental reasons, adding that children “can’t become victims of the disease”.

“The development of a child and the life chances of a child are probably the most important things a society can do,” he said.

Eamon Ryan, the Minister for Communications and Green Party leader, likened the challenge facing the country to “climbing a really hard mountain… but that’s where we are, we have to climb another bit further in this very difficult journey.”

The Cabinet will tomorrow consider a range of new fines and penal measures to be introduced in order to police the new regulations, the Taoiseach said.

Under the new restrictions, some aspects of the existing Level 3 rules will be retained. For example, wedding ceremonies can be attended by up to 25 people, rather than the six people who would be allowed under Level 5. There will also be a review of the effectiveness of the restrictions after four weeks. Meanwhile, the Government has agreed to examine moving out of lockdown on a county-by-county basis.