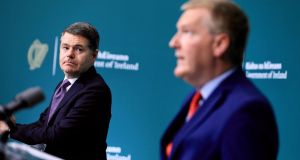 Paschal Donohoe and Michael McGrath, one Fine Gael, the other Fianna Fáil, last night put together the final touches to their first joint budget. It will be a budget like no other.

In the past quarter century, there have been three types of budget days.

In the mid-1990s, they were the Celtic Tiger budgets when taxes came down, spending went up, everyone was bit better-off, and politicians had scope to do what they love doing most of all – delivering good news.

Many of them were produced by Charlie McCreevy, Champagne Charlie, as he was inevitably, annually, dubbed by the tabloids. On such days, Leinster House was mobbed.

Gangs of gawkers – party stalwarts, lobbyists, hangers-on – crammed the halls of the old building from the morning. Red-faced men drank for half the day in the visitors’ bar; TDs ran up tabs; a general air of celebration ensued.

From 2008, there was the second phase as the global financial crisis grabbed the Irish economy and public finances by the throat, forcing the country into a bailout and years of grinding austerity.

The late Brian Lenihan declared in 2010, “We have turned the corner”, but it would be another four years before the austerity let up in the final years of the Fine Gael-Labour coalition.

Then, its budgets were a double act, too: Fine Gael’s minister for finance, Michael Noonan; and the Labour Party’s minister for public expenditure, Brendan Howlin.

In their latter years, they were able to begin returning some of the fruits of the country’s economic growth to its citizens and taxpayers. But the fruits were sparse, and the voters’ gratitude meagre. The Dáil’s visitors’ bar was quiet.

The third type of budget began after a chastened Fine Gael returned to government in 2016, aided by Fianna Fáil. Paschal Donohoe was now the dominant figure, holding both the finance and the public expenditure portfolios.

His budgets sought to tread a careful line between investing in public services still suffering from the years of austerity while putting some extra money in people’s pockets, and rebuilding the public finances.

Last year, Donohoe got his wish and – although it was the last budget before a general election – budgeted for a surplus in 2020. Though that is not quite how things turned out this year.

Tuesday will be another type of budget day. First, it will be the first not delivered in Leinster House. Instead, TDs will sit uncomfortably in the cavernous, and entirely unatmospheric National Convention Centre.

However, there will be echoes of the past – Budget 2021 will also be delivered against a backdrop of fear, anxiety and uncertainty, just like the grim days of austerity.

By contrast, however, there will be boom-like money to spend, due to the Governmentborrowing hugely to meet the costs of the pandemic and to support the ravaged economy until recovery sets in.

So this will be a big budget – the biggest ever, in fact – but there will be no sense of celebration. There will be no champagne, in glasses or metaphors. Borrowed money must be paid back, even if interest rates are low, for now.

Despite their Keynesian spending, Donohoe and McGrath will be criticised, especially by Sinn Féin’s Pearse Doherty, who will lead the Opposition’s attack on the budget.

Doubtless, he and others will find gaps and shortcomings. The Government’s hope will be that none of them blows up sufficiently to derail the entire budget.