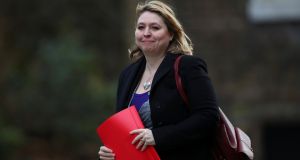 Britain’s Secretary of State for Northern Ireland Karen Bradley said she firmly believed “an agreement in the coming days, while not certain, is achievable. That remains my focus”. Photograph: Hannah McKay/Reuters

A deal to restore the devolved institutions at Stormont is achievable within days, Northern Ireland secretary Karen Bradley told MPs on Wednesday.

But responding to questions in the House of Commons for the first time in her current role, Ms Bradley acknowledged that agreement between the DUP and Sinn Féin was not certain.

“An accommodation between the parties has not yet been reached, but there is no doubt as to their collective commitment towards the restoration of devolution. I firmly believe that an agreement in the coming days, while not certain, is achievable. That remains my focus,” she said.

Ms Bradley declined to offer a detailed update on the talks, which she said were at a delicate stage during which a “running commentary” would be unhelpful. She said that both the DUP and Sinn Féin were engaged in “detailed and intense” negotiations about the issues that remain unresolved.

“The parties are engaged and are working late into the night most nights to reach a resolution. I think that the politicians in Northern Ireland understand the frustration of the people of Northern Ireland and want to deliver for them, but there are differences that need to be overcome. I am doing everything I can to try to get a resolution so that accommodation can be found and devolved government can be restored,” she said.

The DUP’s leader at Westminster, Nigel Dodds, said that it was Sinn Féin rather than his own party which represented the stumbling block in the way of restoring the Assembly and the Executive. And he called on Ms Bradley to join him in condemning Sinn Féin MLA Alex Maskey’s description of Northern Ireland as a “putrid little statelet”.

Mr Dodds said the remark exposed “the sheer disgrace, irony and hypocrisy” of Sinn Féin rhetoric about rights and equality.

“Does she agree that that sort of attitude must stop? If respect is to mean anything, it has to mean Sinn Féin showing respect towards Unionists and those who believe in the Union,” he said.