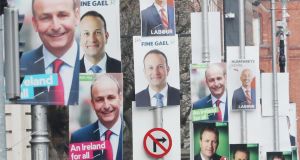 It would be disappointing if, in their desire to impress the electorate with an apparent firmness of purpose, politicians were to engage in another round of hollow promises that will do little to alleviate the burden of crime. Photograph: Niall Carson/PA Wire

There is no doubt that the simmering law-and-order debate has boiled over during this election following the sickening murder of Keane Mulready-Woods.

But such depravity is highly unusual. Despite how it might seem, we are not being submerged by a tidal wave of lethal violence. There were 85 cases of murder and manslaughter in 2007. This dropped to 60 in 2012 and fell further to 47 in 2018.

In terms of homicide we compare favourably with other countries. While statistics offer cold comfort to victims’ families, it is important not to lose sight of the wider context. This is especially true when an election looms and political parties might be tempted to play the law-and-order card.

The killings of journalist Veronica Guerin and Detective Garda Jerry McCabe, in June 1996 had a dramatic impact on the following year’s election. Zero-tolerance policing was put on the agenda along with a commitment to expanding the prison system and providing minimum sentences for some drug offences. These initiatives were pursued in the absence of any evidence they would have a reductive effect on crime.

The experiment with zero-tolerance policing is recalled, if at all, with embarrassment. The emphasis on imprisonment as the primary weapon in the fight against crime has been at the expense of developing an appropriate array of community sanctions and measures. Minimum sentences are a blunt instrument that is at odds with the need to ensure the punishment fits the crime.

It would be disappointing if, in their desire to impress the electorate with an apparent firmness of purpose, politicians were to engage in another round of hollow promises that will do little to alleviate the burden of crime.

In the aftermath of the 1997 election a National Crime Forum was established. It travelled around the country to gain a rounded appreciation of public concerns and to identify where reform was needed. The forum’s report placed little emphasis on the punitive response favoured by the government of the day, calling instead for “a fundamental change of focus to make the prison the option of last resort, to be used sparingly and only when all other options have been tried or considered and ruled out for cogent reasons”.

The forum was to be followed in 1998 by a White Paper on crime. The paper remained a stated priority for several years before references to it gradually ceased. A check on the website of the Department of Justice and Equality this week revealed: “The White Paper on Crime which will incorporate a National Anti-Crime Strategy is due for publication in 2015 [sic]”. It is awaited with ever-dwindling anticipation.

We cannot punish our way to a safer society

The debate about crime and punishment has a staccato quality. Periods of stagnation are punctuated by occasional crises which sometimes result in legislative or policy commitments that have not benefited from adequate forethought.

It must be accepted there is not much politicians can do to affect the level of crime. This is especially true if their focus is exclusively on the criminal justice system and their time horizon is short. But they can do a great deal to influence the tenor of the debate by stoking (or allaying) public fears and by ratcheting up (or down) the level of punitiveness. It would be unfortunate if politicians exploited the current spate of awful killings in an attempt to gain an electoral advantage.

We would be better served if they informed the public the crime problem is manageable, that serious violence is not increasing relentlessly, that the emphasis should be on prevention and restorative justice as opposed to increasingly severe sanctions, and that progress is more likely when options are reviewed dispassionately rather than in the heat of the moment.

If a fraction of the State’s budget for policing, prosecuting and punishing was spent on building the evidence base, we would be in a stronger position to move forward with confidence. There is a great deal about the operation of the criminal justice system that remains opaque. To give just one example, the prison population fell each year between 2011 and 2017, but we do not know why.

In 1997 I was working at the Oxford University Centre for Criminological Research. The Irish Times commissioned me to write a piece about the election campaign under way. I observed that “an obsession with punishment is beginning to infect the debate about crime in Ireland” and this “is not just an extravagant waste of public energy and money. It is a uniquely effective way of brutalising individuals, shattering community ties and generating public anxiety.”

My view has not changed since. We cannot punish our way to a safer society. It is to be hoped as polling day approaches – and manifesto commitments are finalised – our political leaders do not promise otherwise.

Ian O’Donnell is professor of criminology at UCD