The Green surge took the Irish pundits by surprise but how did they fair across Europe, and did the populist parties make big gains? Video: European Parliment 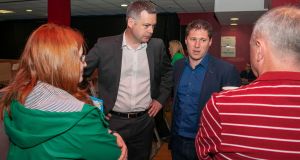 The final two seats will come down to a battle between Sinn Féin’s incumbent MEP Matt Carthy (above, with Pearse Doherty), Maria Walsh, Peter Casey and, at a push, Saoirse McHugh. Photograph: Michael Mc Laughlin

The transfer-friendliness of candidates battling it out for the three remaining seats in the European constituency of Midlands North West could push this race beyond midweek.

Fine Gael’s Mairéad McGuinness scored a whopping 134,630 votes on the first count, taking the first seat in this unusual, far-reaching constituency. The quota for the constituency was 118,986, so she leaves a substantial surplus to her running mate, first-time contender Maria Walsh, the former Rose of Tralee, and puts the country’s ruling party in with a strong chance of winning two seats.

But, as McGuinness said at the weekend, tallies have shown “very strange transfers”.

Walsh picked up almost 40 per cent of McGuinness’s transfers but Independent Luke “Ming” Flanagan, who is second place, Independent Peter Casey, who is in fifth, and Green Party candidate Saoirse McHugh who is in sixth, also picked up their shares too.

Flanagan’s re-election in the second seat seems almost guaranteed given his broad appeal as a second or third choice for voters.

McGuinness’s surplus may not be enough to leapfrog Walsh into third place, but they are likely to be enough to extend her lead substantially over Casey and McHugh.

Fianna Fáil candidate Brendan Smith TD, seventh in the first count with 42,814 votes, ruled himself out of contention, saying he would want to be “fierce optimistic” not to.

The transfers from the Fianna Fáil candidiates are likely to determine who fills the final seats.Carthy’s ties to the Border mean he should fare well from Smith’s transfers. Tallies have shown Walsh will probably benefit from transfers from the other Fianna Fáiler, Anne Rabbitte, who came eighth. Carthy and Walsh look to be in the strongest position to take the third and fourths seats. Carthy’s 20,000-vote lead will help over other, transfer-friendly contenders.

“When you’re in a battle for transfers, it’s always better looking at them than for them,” he said. It is likely to take several counts before all four seats are finally filled.