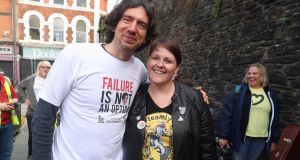 Hundreds gathered in Derry on Monday for a rally at the conclusion of a three-day peace walk from Belfast in memory of journalist Lyra McKee.

Ms McKee (29) was shot dead by dissident republican group the New IRA while observing clashes with police in the Creggan area of the city on April 18th.

Demonstrators walked from Belfast, where Ms McKee came from and where her funeral was held on April 24th, to the square in Derry which hosted the first rallies in protest against the gunmen hours after the journalist’s death.

Snow Patrol frontman Gary Lightbody joined the peace walk on the last leg on Monday ahead of the rally at Derry’s Guildhall Square.

Ms McKee’s sister Nichola Corner held a copy of the 1998 Belfast Agreement aloft as she urged politicians to do a deal.

In further reference to the failure to get the powersharing institutions at Stormont up and running again, a spokeswoman for the walkers told the crowd in Derry that failure to do the right thing was not an option.

“We want to thank the McKee family for their honesty, their integrity, their love and their strength,” she said.

Also present was Derry man Richard Moore, who was shot and blinded at the age of 10 by a rubber bullet fired by a British soldier. Now a peace activist, he was instrumental in bringing the Dalai Lama to Derry.

Mr Moore urged politicians to compromise. “What we need to see out of our leaders is for them to take a risk for peace,” he said.

He said the gunmen were destroying their own cause.

Meanwhile, performer Katie Richardson admitted to being emotional before she sang a song entitled “Lyra” in front of the crowd.

Then a newly-formed group called Lyra’s Choir filled the stage. Some members had met only hours previously, and came from across Northern Ireland to sing.

They performed Ms McKee’s most listened to song on Spotify, Smalltown Girl.

Many in the crowd wore T-shirts in her memory and carried flags with messages of peace.

During Ms McKee’s funeral, Fr Martin Magill, a friend of McKee and of her north Belfast family asked “why in God’s name” it took her murder to bring politicians to a point where they sought to resolve their differences.