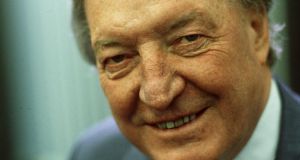 The Irish government became so frustrated at British inaction over widespread criminality and collusion by the Ulster Defence Regiment in 1989 that it compiled a list of all the convictions against members of the regiment.

Senior figures in the Irish government, including taoiseach Charles Haughey, berated the British government for failing to reform the UDR, whose members were overwhelmingly Protestant and loyalist.

The Anglo-Irish Agreement in 1985 had committed the British government to major reforms of the UDR. They included improved training and discipline, non-deployment in sensitive areas (ie nationalist areas); and – most importantly – a requirement that the RUC accompany the UDR on patrols.

But during 1989, it became obvious those commitments were not being implemented, even though at least one UDR member a month was being convicted for murder during that year. It also came against a background of allegations of collusion between the security forces in the North and loyalist paramilitaries, who had intensified their campaign of sectarian killings.

A senior Irish diplomat based in Belfast voiced his private concerns that the Anglo-Irish Agreement was being marginalised and being sold to Unionists as “palpably harmless and irrelevant on any practical level”.

So concerned was Haughey that he included a hard-hitting passage on the UDR in his speech to the annual Fianna Fáil commemoration in Bodenstown, Co Kildare.

In the speech, the taoiseach called for a comprehensive review of the UDR if the State apparatus was to retain any public confidence. He said the UDR was “almost exclusively drawn from one section of the community”.

In a briefing paper, seen by Haughey, Irish officials said the phenomenon of UDR soldiers being involved in crime and murders was “so serious and the pattern of misconduct so well-established that it is not credible to speak of a few bad apples”.

“The current rate of UDR convictions [for murder] is one per month.”

The senior Irish diplomat in the Maryfield secretariat in Belfast, Seán Ó hUigínn, said in a secret communiqué to Dublin that Britain continually pledged “best endeavours” but refused any specific promise of improvement.

Ó hUigínn was concerned about the quality of response he was getting from the British side on a wide range of issues.

He said it seemed there was a “tacit policy of marginalising the operation of the [Anglo-Irish] Agreement. It demonstrates to unionists that the Agreement is palpably harmless and irrelevant on any practical level.”

He advised there “may need to be a frank exchange between ministers at some point”.