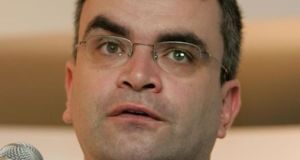 Legislation to provide improved public services through Irish has been described as “like the emperor’s new clothes”.

The long-awaited legislation, first mooted in 2011, aims to ensure Irish speakers can conduct their business with Government departments through Irish in both Gaeltacht and non-Gaeltacht areas.

The legislation also aims to ensure that all public bodies recognise and use the síneadh fada to correctly use the individuals’ names in all documentation. Language activists and supporters have long criticised Government departments for the failure of computer systems to recognise and include the fada, a staple of many Irish language names.

But Mr Calleary said while the legislation “is promising a lot”, no targets had been established for when the 20 per cent goal would be reached and “this is its biggest weakness”.

He was looking forward to comprehensive legislation to improve the provision of Irish in public services but “this is like looking at the emperor’s new clothes - there are no clothes there”.

The Mayo TD said the legislation needed the backing of a senior Government Minister and it was time to “stop patting Irish on the head”.

Minister of State for the Gaeltacht Sean Kyne, who introduced the legislation, said “Irish is the most valuable natural resource we possess”.

He said the Bill was at the centre of efforts to improve the 2003 Irish Language Act. Other provisions included a requirement that letters summoning people for jury service should be bilingual, a measure long sought by Irish speakers.

Mr Kyne acknowledged the frustration of TDs because of the delay in the Bill’s introduction but he hoped it would progress as quickly as possible and it would reach committee stage, where potential amendments are debated, early in the new year.

Fianna Fáil TD Aindrias Moynihan hit out at the delays in the legislation and said using things like Brexit as an excuse “just shows the Government doesn’t care”.

He said just 2 per cent or 3 per cent of public sector staff “are comfortable speaking Irish”.

Sinn Féin spokesman on the Gaeltacht Aengus Ó Snodaigh said penalties and fines should be imposed on Government departments which did not deliver the 20 per cent recruitment target by a set date, in the same way political parties would have their funding cut if 30 per cent of their general candidates are not female.

However, he did not blame the Minister for weaknesses in the legislation. “You have done more than other ministers have done,” he told Mr Kyne.

But he said the Civil Service was protecting itself with no “proper pressure on the system” to protect the language and ensure the 20 per cent goal was delivered. That target “is not radical”, he said. It would be a radical measure if 100 per cent of staff had to speak Irish by 2030.

Debate on the Bill continues in January.

Daughter insisted she did not ‘harm a hair’ on Patricia O’Connor’s head 19:11
Mitchell O’Connor does not want drugs decriminalised ‘in our country ever’ 19:09
Motorists urged to take care after snowfalls in west of Ireland 18:54
Man jailed for sexually assaulting woman with special needs 18:12
Doctor struck off register for failing to keep up with professional competency 17:43
SUBSCRIBER ONLY