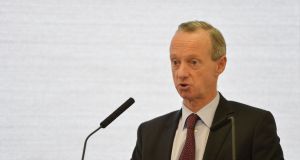 Chairman of Newsbrands Ireland Vincent Crowley said Facebook and Google need to be treated appropriately, as newspapers would be in a similar situation. File photograph: Alan Betson/The Irish Times

The banning of abortion referendum advertising by Facebook, Google and Youtube may indicate the beginning of a realisation by these companies that they need to take responsibility for the content they publish, a conference on defamation has heard.

Social media companies have to take responsibility for the content that goes up on their platforms and the decision to ban political advertisements during the referendum campaign was “quite telling,” said Vincent Crowley, chairman of Newsbrands Ireland.

He was addressing a conference on defamation in Malaga, Spain, organised by the Bar Council of Ireland. Newsbrands represents Irish newspapers, including The Irish Times, and the Irish editions of UK based newspaper publishers.

“Facebook and Google need to be treated appropriately, as newspapers would be in a similar situation.”

Yet as the law stands, such companies are not treated as publishers in the view of the law.

He said he did not believe there was an appetite in Ireland to consider greater regulation of internet companies. Google and Facebook are significant employers in Ireland, he noted.

Mr Justice Robert Jay, a judge of the High Court of England and Wales and formerly lead counsel for the Levenson Inquiry, which investigated the UK media in the wake of the News International phone hacking scandal, also addressed the issue of social media and the law.

In an address entitled Reflections on regulation of the media in a post-Leveson digital world, he said a “real challenge” facing the world is what is happening in places like the Russian Federation, where there are “alleged attempts” to influence political opinion in jurisdictions like the UK and the US, using the internet.

Any measures designed to deal with this problem will have to be agreed by way of an international consensus as otherwise society would be “fighting a losing battle,” he said.

There was a difficulty in applying the traditional tools of the common law to digital companies given their global nature and “self regulation may not be the complete answer.”

The issue was an extremely problematic one as “the internet spirals almost out of control”.

Mr Justice Jay, who hears defamation cases, said there has been a shift in the UK to people taking privacy actions, for which there is no cap on the size of the awards that can be made.

In the UK there is a cap on the size of defamation awards, which is not the case in the Republic.

Some of the recent phone hacking cases have seen awards being made that are out of kilter with personal injuries awards, he said.

The traditional press is in jeopardy and ultimately this is a threat to democracy.

In this context of commercial difficulty, the publishers represented by Newsbrands spent more than €30 million in the five years to 2015 on defamation actions, mostly in settlements and legal costs.

He said most publishers are not willing to risk going to court and instead find themselves conducting settlement negotiations in a context where the Supreme Court has approved a €1.2 million defamation award to public relations executive Monica Leech.

Ms Leech was initially awarded €1.8 million in damages in the High Court in a case she took against Independent News & Media. The award was reduced on appeal by the Supreme Court to €1.2 million.

Last year the European Court of Human Rights criticised the award because of its effect on freedom of expression, but the ruling leaves the award intact.

The Luxembourg court said the award came after an “unusually salacious campaign” in the Evening Herald that constituted very serious defamation.

The Leech award is in contrast with personal injuries claims, where general damages have a cap of €450,000, Mr Crowley said.

It “overhangs” all settlement negotiations conducted by newspaper publishers who make “settlement awards in the hundreds of thousands on a regular basis.”

Eoin McCullough SC, who is an acknowledged expert on Irish defamation law, said the change in the law introduced by the Government in 2009, ended up being “not really a reform” and changed very little.

Michael McDowell SC, speaking from the audience, said he was in Government at the time and there was very little support for the act.

Mr Crowley said juries should not be involved in defamation actions. If judges were involved in both deciding on the cases and on the level of damages, there would be more predictability and publishers would have access to reasoned judgments.