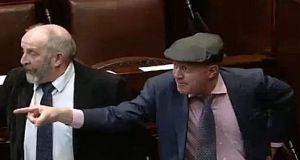 Posters advocating a No vote were prominently displayed in Kilgarvan village, leaving locals in no doubt where the two Healy-Rae TDs stood on the contentious issue. File photograph: Dáil Éireann TV

The sense of surprise was palpable when it became clear that not even the mighty Healy-Rae machine could halt the abortion Yes juggernaut in the family’s Kerry stronghold.

The tally figures showed the referendum had passed by 298 votes to 233 in Kilgarvan, where Independent TDs Michael and Danny Healy-Rae are based.

The overall result in the Kerry five-seater was a majority of 58.3 per cent to 41.7 per cent for the Yes side.

Posters advocating a No vote were prominently displayed in Kilgarvan village, leaving locals in no doubt where the two TDs stood.

Michael Healy-Rae denied he was out of touch with the majority of his constituents.

“Forty-two per cent of the people of Kerry had the exact same position as I did,’’ he said.

Like other TDs on the No side the Healy-Rae brothers will analyse the electoral implications of the vote. The surprise Yes majority in the Healy-Rae stronghold, mirroring similar results throughout the country, comes at a time when there is speculation the second family seat, Danny’s, could be under threat from Fianna Fáil at the next election.

“That may not happen again and they could face a significant challenge from Fianna Fail if it gets its house in order,” he said.

The other three seats in the five-seater are held by Fianna Fáil’s John Brassil, Fine Gael Minister of State for Tourism Brendan Griffin, and Sinn Féin’s Martin Ferris.

Mr Ferris’s daughter, Toireasa, will be the candidate next time.

An unknown factor is what are perceived by some to be Danny Healy-Rae’s increasingly eccentric views on a variety of topics.

Local sources say even hardened supporters have been bewildered by some of Danny’s comments. Others say they are no more than part of his personality.

He has dismissed climate change, adding that “only God controls the weather”.

When challenging those opposed to the cutting of hedgerows, because of the danger to wildlife, he said he did not believe birds were so foolish as to make their nests on the side of a busy road.

His opposition to the Road Traffic (Amendment) Bill, proposing an automatic driving ban for first-time drink-driving offences, has a sharp political edge to it.

Its sponsor is his sworn political enemy, Minister for Transport Shane Ross.

When Mr Ross described him as a “road traffic terrorist’’, Mr Healy-Rae responded that he would sue. “I look forward to receiving the writ,” said Mr Ross.

Michael Healy-Rae, meanwhile, retains a good working relationship with the Minister. His discomfort is evident when his brother launches yet another attack on Mr Ross in the Dáil.

In the end, though, it is likely to be raw politics which will determine whether the two Healy-Rae seats can be retained. In the 2016 election, the Healy-Rae dynasty was arguably at its height, thanks to the family, particularly Michael, who had built on the foundation laid by their late father, Jackie, an Independent TD from 1997 to 2011.

Michael romped home with 20,378 first preferences, while Danny had 9,991, securing a seat with a generous transfer from his brother’s surplus.

Fianna Fáil is expected to add two candidates to the ticket to join outgoing TD John Brassil, high-profile mayor of Killarney Niall Kelleher and Cllr Norma Moriarty from Waterville, who is a schoolteacher in Kenmare, at the next election.

This spread of candidates will exert pressure on the Healy-Raes, given that Fianna Fáil lost out by not having a Killarney town candidate last time.