Bill on abortion law to be brought to Cabinet in July, says Harris 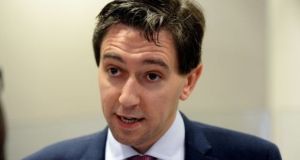 Minister for Health Simon Harris was praised by his Fine Gael colleagues with one TD describing him as the ‘face of the new Ireland’. Photograph: Cyril Byrne

The Cabinet will consider a Bill to implement the decision of the people on the Eighth Amendment on July 10th.

Minister for Health Simon Harris has briefed Opposition health spokespeople about the timeline for legislation to regulate the termination of pregnancy.

Mr Harris is understood to have said the Bill will be brought to Cabinet on July 10th and considered by the Dáil on July 11th and 12th.

If necessary, the House will sit another week before sending the Bill to the Oireachtas committee on health.

Meanwhile, Taoiseach Leo Varadkar has told the Fine Gael parliamentary party there is a free vote for members on the upcoming legislation and any proposed amendments.

He said it was up to party colleagues to decide how they wanted to approach it. The meeting heard there was a huge demand to have the legislation passed as soon as possible but it should not be done in a rushed manner.

It is understood there was significant praise for Mr Harris at the meeting.

Minister of State Sean Kyne said he was Fine Gael’s most effective communicator, while Louth TD Fergus O’Dowd said he was the “face of the new Ireland”.

At the cross-party meeting earlier, Mr Harris said the Dáil would consider report stage of the Bill on its return from the summer recess and it would then be sent to the Seanad for consideration.

It is still the Government’s intention to have it passed in the early autumn, the Minister told members of the Opposition.

Fianna Fáil TD Stephen Donnelly told the meeting he wanted to see urgent progress on the matters of decriminalisation. Currently a woman can face 14 years in prison if found to have procured an abortion in this country. Doctors who assist face the same penalty.

Mr Donnelly also called for the Information Act to be lifted to allow for doctors in Ireland to refer women to abortion clinics abroad and to consult with doctors in other jurisdictions about their medical status.

There were also calls for the State to cover the costs of parents who receive a diagnosis of a fatal foetal abnormality if they choose to travel to the United Kingdom.

The country voted overwhelmingly in favour of repealing the Eighth Amendment in Friday’s referendum.

The focus has now shifted to ensuring the legislation is progressed as soon as possible. Abortions services are likely to be available in Ireland in 2019.