Stakes rise for both sides in Coffey defamation case 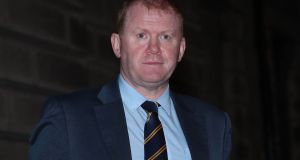 Senator Paudie Coffey leaving the Four Courts after the jury failed to reach a verdict in his High Court action. Photograph: Collins Courts

Both sides in the Paudie Coffey defamation case against the Kilkenny People are now faced with difficult “double or quits” type decisions following the failure of the jury to reach a verdict after a 13-day High Court hearing.

After more than 10 hours of deliberation the jury failed to reach a verdict in a case that concerned an article headlined “Coffey the Robber”. The article was based on a press release issued by Senator Paudie Coffey’s Fine Gael colleague, Minister of State for Local Government John Paul Phelan.

The proceedings now go back into the High Court list and it is likely a new trial will be scheduled for some time in the spring of next year. If the matter goes to trial and a verdict is arrived at, then the losing party would be faced with paying the legal costs of two sets of High Court hearings.

If Iconic Newspapers, the publisher of the local newspaper, loses, then it could be faced with paying damages as well as the legal costs of both sides.

As the costs clocked up by the trial just ended are likely to be in the region of €300,000 each, then the proceedings have the potential to create total legal costs of up to €1 million prior to the conclusion of a second trial.

No party can walk away from the proceedings now without entering into some type of agreement with the other side as to how the issue of costs will be settled.

Mr Coffey is already looking at the possibility of having to pay the Kilkenny People and its publisher, some or all of their costs because of the jury’s inability to reach a verdict. But if he chooses not to walk away, then he faces the possibility that, sometime next year, he could find himself facing a legal bill of an even greater size.

It is not known what arrangement Mr Coffey has with his own legal team. Sometimes parties taking legal actions have an agreement with their legal teams that not all of the costs would be sought if the case is lost. But Iconic will undoubtedly seek its costs in full, and that bill alone could reach half a million euro by the end of a second trial.

From the point of view of Iconic, the situation is equally stark. If the matter proceeds to a second trial and it loses, it faces the prospect of having to pay its own legal bill, that of Mr Coffey, and any damages that are awarded by the jury.

The fact that juries can sometimes make very sizeable awards in defamation cases is one of the reasons why many media outlets choose to settle rather than fight a case in court. The Coffey case is notable in that the publisher chose to fight the case.

Another factor that Iconic will have to take into consideration is whether, if it wins a second trial, Mr Coffey would be in a position to pay their legal costs.

So both sides have very good reasons to want to come to a settlement. On the other hand that was the case before this trial, and the stakes have now been hugely increased because the trial lasted a lot longer, and proved hugely more expensive, than anyone envisaged when the chance of a pre-trial settlement was still a reality.

The jury was asked to consider a number of questions and told that a majority verdict of nine to three would suffice. We do not know what the breakdown was in terms of the obvious disagreement that existed among the jury members. There is nothing to indicate that they got past the first question, which concerned whether the article published was to the effect that Mr Coffey had acted dishonestly, or improperly, or even that he “sought to ‘rob’ a chunk of south Kilkenny” as part of a boundary review – the subject of the Phelan press release.

A later question to be considered by the jury, if it had answered previous questions in a particular way, asked to what extent, if any, any damage caused to Mr Coffey should be apportioned to Mr Phelan, thereby reducing any award of financial damages against the Kilkenny People.

Mr Phelan is not being sued, and so would not have to make any payment. But any finding that he shared culpability would reduce the damages to be paid by the newspaper. So there is a lot for Mr Coffey to consider before he makes his next move. And the same applies to Iconic Newspapers.