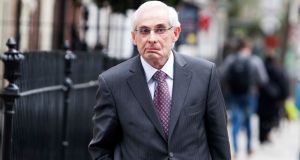 Former Governor of Central Bank John Hurley has objected to the finding of the inquiry. Photograph: Leah Farrell/Photocall Ireland

A reference to the solvency of the banks was removed from a government statement issued on the morning of the bank guarantee, the Oireachtas banking inquiry has found.

The Irish Times has learned the parliamentary committee has established that the press release on September 30th, 2008 – confirming the government decision to introduce a blanket bank guarantee – was altered to take out a claim that the institutions had sufficient funds.

This raises questions about how long before the bank bailout in November 2010 was the government aware the banks were insolvent.

The Oireachtas committee is also expected to dismiss the suggestion that Anglo Irish Bank would have defaulted if a guarantee was not agreed that night.

The inquiry, which was set up to investigate the cause of the crash, will confirm the Central Bank lobbied for a blanket bank guarantee, but had a contingency plan in place if one was not signed off in September 2008.

The final report of the committee is highly critical of the Financial Regulator, the Central Bank and successive governments for failing to see the risks in the run-up to the economic crash.It will conclude the regulator and the Central Bank had sufficient powers to intervene, but did not.

Former governor of the Central Bank John Hurley has objected to this finding.

There is also criticism of the department for an over-reliance on the advice of the Central Bank, and insists it should have carried out its own risk assessment.

The final report also finds there was no cost-benefit analysis of the property tax incentives introduced by successive governments. It concludes had they been amended or abolished sooner it might have mitigated the impact of the property crash.

It confirms the former president of the ECB, Jean Claude Trichet, directly intervened and warned Minister for Finance Michael Noonan that a “bomb” would go off in Dublin if it moved to introduce burden-sharing.

The report does not estimate how much could have been saved, but outlines the various figures quoted by the National Treasury Management Agency and former International Monetary Fund official Ajai Chopra, who claimed it could have saved up to €9 billion.