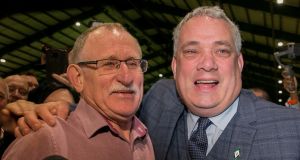 Sinn Féin’s Dessie Ellis has dismissed criticism of his joining supporters chanting a rebel song as he looked set to top the poll in Dublin North-West early on Sunday.

As early tallies were putting his first preferences as high as 45 per cent of the electorate in the constituency, the outgoing TD joined more than a dozen supporters in the RDS count centre in singing Come Out Ye Black and Tans.

The group also waved tricolours and a Sinn Féin banner.

The impromptu performance of the Dominic Behan song popularised by the Wolfe Tones – which includes the refrain “tell them how the IRA made you run like hell away” – prompted something of an online backlash.

“Everybody has worked very hard for this campaign,” he said.

“Everyone is excited and they think we are doing very well, so I wouldn’t put too much on it.”

However, one of his staff was overheard rebuking him after the performance, saying: “You’re an elected representative!”

Mr Ellis, a long-time republican activist before becoming a TD, was convicted for possession of explosives in 1983, having been extradited from the US.

A court heard he had been in possession of multiple power-timer units for IRA bombs, including those suspected of being used in the Hyde Park and Regent’s Park bomb attacks in London.

He was suspected by the authorities in Dublin and London of being a leading bomb maker for the IRA, and was later extradited to Britain to face trial on similar charges. During his UK trial in 1991, he said he had helped check the circuit boards of IRA devices, but for use in Northern Ireland only. He was eventually acquitted.

Separately, Pauline Tully, a Sinn Féin candidate in Cavan-Monaghan, has said a video purporting to show her campaign van playing a pro-IRA song may have been faked.

The video of the van seemingly playing the Wolfe Tones’ Celtic Symphony, including the line “Ooh, ah, up the Ra”, in Kingscourt, Co Cavan, emerged online in recent days.

At the Cavan-Monaghan count centre in Cavan town on Sunday morning, Ms Tully said she was not present when the video was recorded, and she thought the audio on the video did not seem authentic.

“I saw the video and I thought it looked like it was imposed,” she said. Asked if she believed the video was faked, she said: “Possibly. I can’t say for certain. I don’t know.”

Asked who would have made a fake video, she said: “You just look at the headlines and the stuff that has been thrown at us in the last week or so. Your guess is as good as mine.”