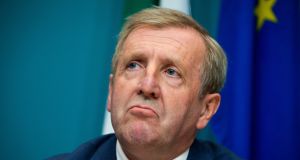 All three of the seats in Cork North-West were filled in one fell swoop during the fifth and final count on Sunday evening.

Each of the incumbent TDs – Michael Creed (FG), Michael Moynihan (FF) and Aindrias Moynihan (FF) – managed to retain their seats. There was therefore no surprise shake-up for the constituency, although Fine Gael had hoped to capture a second seat.

The party’s John Paul O’Shea was eliminated in the constituency after the fourth count.

Transfers from Aontú candidate Becky Kealy, eliminated in the third count, were kinder to Ciarán McCarthy of the Social Democrats. He received 2,161 transfers after the first-time candidate was eliminated.

Ms Kealy, from Kanturk, earlier said she was relatively happy with her result.

“I was only selected as an Aontú candidate back in September, we’re only one year old in our party and I’m after coming out at around 7.5 per cent. I had 3,877 first-preference votes, which is massive,” she said.

March temperatures were below average across most of country 14:02
Almost 90% of applicants receive Covid-19 unemployment payment 10:59
Q&A: What financial help is available during the coronavirus pandemic? 13:44
Child rapist with Covid-19 concerns refused bail 13:37
Separated, divorced fathers’ access to their children via video ‘not being facilitated’ 13:31