Sinn Féin meeting that brought political crisis to a head 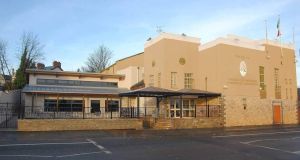 Felons Club in Belfast: after a meeting in the club in early January “Sinn Féin pressed a political nuclear button that has thrown Northern Ireland into uncertainty”. Photograph: from the club’s Facebook page

Inside the Felons Club in west Belfast the mood was immediately obvious. On a Saturday afternoon in early January several hundred republicans packed an upstairs room to hear Gerry Adams, first in a public speech and then in a private briefing, after the media had been asked to leave.

A developing political crisis in Northern Ireland was about to be brought to a head. Within 48 hours, Martin McGuinness had resigned as deputy First Minister also forcing then First Minister Arlene Foster out of office.

Almost 20 years after Good Friday 1998, the threads of that historic agreement – one that was held up internationally as the way to confirm and consolidate peace – have loosened and are coming undone.

Republicans are now questioning the worth of the Stormont institutions and a decade-long relationship with the DUP at the head of the Northern Ireland Executive.

This was the mood inside the Felons Club that Saturday in January. Within hours, news filtered out that when that republican gathering moved into private session, the loudest cheer was in response to a call to “bring the institutions down now”.

In other words, collapse Stormont. “People have reached the end of their tether,” a senior republican said that evening. “The anger in our community is palpable.”

The question being asked, he said, is: “Why are you up there [in Stormont]?”

For now, the Sinn Féin leadership has no answer to that question and, after the McGuinness resignation, the message being delivered to the republican grassroots is that there will be “no return to the status quo”.

Adams has not only heard what people are saying. He has heard what he was being told to do.

For over two decades, a key consideration for the republican leadership has been the cohesion of its movement and party and community.

During that period, Adams and McGuinness have relied on a small group of senior republicans to be their eyes and ears, to take the pulse and to know the mood.

Among that small group are a number of Belfast republicans, who were significant figures in the IRA leadership and who have been part of the transition into peace and into politics. Bobby Storey, Seán Murray and Martin Lynch were all inside the Felons Club.

“They are not just reflecting it, they are the mood,” another republican told me. He means that key group, working closely with Adams and McGuinness and other senior republican figures such as Ted Howell, have come to that point of questioning the credibility and viability of the Stormont political project.

When such senior figures speak, they cannot be ignored. The talk now is of the need for “qualitative change” if the political institutions are to be restored.

Republicans have been reminded of the old ghosts of unionist rule. They accuse the DUP of not embracing, indeed of ignoring, the principles and rules of partnership and power-sharing – the foundation stones on which the Good Friday Agreement was built.

There are big issues on which they have made no progress – a process to address the vexed questions of the past, the shelved plan for a Maze/Long Kesh peace centre and an Irish Language Act.

So there is a mood, seen and heard in the Felons Club, that has to be managed; managed at a time of transition in the republican leadership, which is having to be accelerated because of McGuinness’s illness.

Health Minister Michelle O’Neill, who has taken on a more prominent role in recent times and who was on stage with Adams in the Felons Club, now steps into that position of leading the Sinn Féin Assembly group.

For many in the Northern Ireland communities, McGuinness will only ever be seen in an IRA frame, his name linked to the bombs and bullets and death and destruction of a decades-long conflict, but his story reads from war to peace.

There have also been remarkable moments of reconciliation. His meetings with Queen Elizabeth and his participation in a debate with PSNI Chief Constable George Hamilton in west Belfast in 2015.

Within the republican community, there was recent anger and criticism of McGuinness’s presence in London at the unveiling of Irish artist Colin Davidson’s portrait of Queen Elizabeth.

This criticism is part of that wider mood and questioning. Now, after almost a decade in government, there has been a very public breakdown in the relationship between the DUP and Sinn Féin.

It was a reference to the election – scheduled for March 2nd. But, let’s go where? This is the unanswered question.

A new agreement to achieve the certainty of partnership in government and to settle impossible issues such as legacy will take time.

If there is no Northern Ireland Executive, what fills the gap? Some unionists are predicting a long period of direct rule; the pressing of a rewind button until some way forward can be found.

That new agreement to achieve the implementation of old agreements could mean a very long negotiation before the Northern Ireland Executive is rebuilt.

Beyond the election, politics will enter what a senior republican called “uncharted waters”.

There is also concern that dissident republicans will attempt to step into the space, fears underscored when a police officer was wounded in a gun attack in north Belfast on Sunday evening.

Brian Rowan is the author of Unfinished Peace