Abortion question, bullying allegations and intolerance of dissent could cause problems 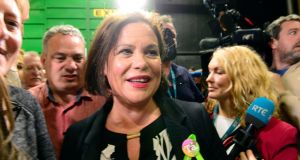 On a roll: Mary Lou McDonald at the RDS during the abortion referendum count. Photograph: Cyril Byrne

Mary Lou McDonald is on a bit of a roll.

The Sinn Féin leader was centre stage for the final phase of the abortion referendum. She’s riding high in opinion polls. The New York Times gushed last week that she was “being whispered about as the possible first female prime minister of Ireland”. And today she is serving notice that she is ready and willing to enter government.

McDonald may have taken Manhattan. She will have a harder job convincing Fine Gael and Fianna Fáil, both of whom are resolutely opposed to any deal with Sinn Féin.

It’s McDonald’s current mission to overcome that antipathy, or manoeuvre the old rivals into a position where they feel compelled to swallow it.

She can fairly point to the recent history of Irish politics, which is a procession of people doing deals they said they never would. But while the post-election numbers may mean a coalition government involving Sinn Féin is an obvious option, the example of the present Government suggests that it won’t be the only one.

The process of putting together a government after the next election will be convoluted, but it’s one that McDonald is determined to elbow her way into.

McDonald is luxuriating in the approval of repeal supporters since her prominent role in the abortion referendum campaign. She was especially visible in the final weeks, appearing in two television debates and performing capably in both. She describes the campaign as “actual new politics . . . because it was politics beyond politicians”.

There is a bit of unfinished business for Sinn Féin, though; the Government’s proposed legislation goes well beyond Sinn Féin party policy, which McDonald will now seek to change to a pro-choice position that will accord with the forthcoming abortion Bill.

Debate in the party, she says, “is under way at regional level and local level”.

“We had some discussion around this. How do you fairly and democratically shape party positions on this issue?”

The way Sinn Féin usually does that is that the leadership decides where it wants to get to and then consults extensively with the grassroots, who then approve the position. A special ardfheis in Belfast later this month is likely to endorse the leadership position. But clearly not everyone will agree.

Two Sinn Féin TDs, Peadar Tóibín and Carol Nolan, campaigned strongly for a No vote in the referendum. It looks like she will have to throw them out.

“I’ve allowed lots of latitude for conscience, McDonald says, “the absolute right for people to hold their view, to articulate their view, to have their view respected . . . Where the line is drawn is where it comes to making the law and forming public policy. And in those circumstances when a Sinn Féin representative walks into an elected chamber, there is a duty on that person whoever they are to vote in accordance with Sinn Féin policy.”

“Everyone who runs for Sinn Féin has to be a Sinn Féin member in good standing. They’re fully au fait with how the party works. All of us know how policy is arrived at . . . That’s how we do our business.”

And those who in conscience cannot abide by your new position – you will show them the door?

“No, I won’t. The party rules will be applied.”

McDonald herself has held a pro-choice position for a long time, she says. So what about when the party’s position was not pro-choice? Did she argue and vote for anti-abortion positions then?

Transcripts of Dáil debates on abortion in recent years show McDonald apparently struggling with her responsibility to hold the party line. When Clare Daly proposed a constitutional amendment in 2014, McDonald made a somewhat strangulated speech: “I am advised,” McDonald said, “that Deputy Daly’s well-intentioned proposal goes beyond the democratic mandate afforded me by virtue of my party’s long-standing compromise position, clearly stated and well-known to the electorate. I am, therefore, unable to support this legislation.”

She says now: “Let me tell you, I have found myself in positions and at times prior to being leader as an activist where the party’s position didn’t accord with my personal view.”

The priority of party discipline and loyalty is something frequently cited by the party’s opponents as evidence of the cultural chasm that separates it from the political mainstream.

Rivalry between people can become a thing locally. There were incidents. That’s not unique to Sinn Féin

And while it might make them easy coalition partners, the party has struggled with accommodating dissent. There has been an exodus of prominent members and councillors in recent years, amid allegations of a culture of bullying and intimidation. McDonald pledged to address the issue when she became leader.

“Yes, it is an issue,” she says. “I don’t believe there is a culture of bullying. But I do know that we have a changed party, a much bigger party. The way we manage the party has been suited to a smaller party. That doesn’t work now.”

She says that the party is “putting the finishing touches to a commission – a commission on diversity, equality and inclusion. It will facilitate conversation across the party about the party. That will be helpful.”

The members took it to heart. People took the gravest offence at the suggestion of a culture of bullying

Is it an admission of a widespread problem?

“It’s an admission that it’s a human organisation . . . It’s wrong but it happens. Rivalry between people can become a thing locally. There were incidents. That’s not unique to Sinn Féin.

“You can’t say that it’ll never happen in any organisation,” McDonald says. “The members took it to heart. People took the gravest offence at the suggestion of a culture of bullying.”

The question for the outside world, though, is not whether Sinn Féin members have been offended – it’s about the nature of the culture within the party, and what that says about it, and how it would use power if it came to hold it. And the party clearly has questions to answer about it.

If there isn’t a culture of bullying, there is certainly a culture of obedience to authority in the party, a prioritisation of the party’s interests, and many of those who fall foul of it have been ostracised. As it prepares – it says – for government, those are questions that are unlikely to go away.

1 Coronavirus: 442 new cases, 4 deaths as stricter house visitor limits introduced
2 Dr Tony Holohan expected to return to his post next week
3 Covid-19 infections from funeral led to a third of one restaurant’s staff self-isolating
4 How one couple’s weekend away resulted in 30 Covid-19 cases
5 Small children should be restricted to one square of chocolate a week
Real news has value SUBSCRIBE