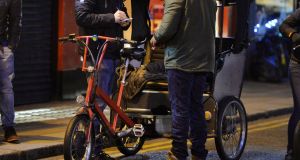 Bnning rickshaws would be a significant step in managing the risk for public safety, Minister for Transport Shane Ross will say. Photograph: Alan Betson

Minister for Transport Shane Ross is set to propose a ban on the use of rickshaws.

Mr Ross is to outline his intentions at an Oireachtas committee meeting on Wednesday.

In his opening remarks, the Minister will confirm he has been debating the regulation of the vehicles or an outright ban and will say that the status quo is not an option.

On the issue of regulation, he says new laws would be required to allow for driver and operator licensing, vehicle registration and licensing, rickshaw roadworthiness (involving an NCT-style test), motor tax, fares regulation, regulation in the standards of service, and offences and penalties to allow for proper enforcement.

“Rickshaws are arguably meeting a certain niche demand which is not being met by the traditional public transport services . . . Regulating could allow rickshaws to continue in operation, contributing a fun and vibrant aspect to city life,” he will say.

“However, significant resources would need to be invested. More admin and enforcement resources would be needed in the [National Transport Authority] and the Garda, possibly also in the [Road Safety Authority]. Implementing a full licensing regime together with enforcement would come at a substantial cost to the State. All for a relatively small number of vehicles.”

Prohibition would be a significant step in managing the risk for public safety, Mr Ross will say.

“New legislation would be needed, but enforcement of a ban should cost significantly less than implementing a full new regulatory regime. We would still have to define the rickshaw as a vehicle in law, and provide for detention powers. But this would involve a much simpler piece of legislation.”

The Minister’s officials are engaging with the Office of the Attorney General to consider any blockages which might arise with the preferred approach of prohibition, including how best to weigh and balance private interests in the context of the public good.

“Once consultations with the Office of the Attorney General are complete, I expect to be in a position to finalise and announce my decision before the end of this Dáil term,” he will say.