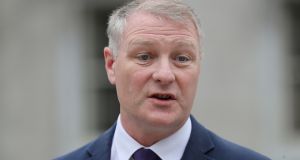 Along with Clare TD Violet Anne Wynne, Sligo Leitrim TD Martin Kenny was listed as a member of the group. They both left when The Irish Times contacted Sinn Féin about messages posted. Photograph: Nick Bradshaw

Sinn Féin has asked Facebook to remove a secret group of 16,000 supporters which some TDs and councillors were members of until this week.

The supporters' group contained abusive and sometimes violent comments about numerous high-ranking politicians including the Taoiseach and Tánaiste. It was not searchable on Facebook and members could only get access if they were specifically invited.

Sligo Leitrim TD Martin Kenny and Clare TD Violet Anne Wynne were listed as members of the group along with multiple well-known councillors. However they left after The Irish Times contacted Sinn Féin this week about messages which had been posted in recent weeks and months.

A spokesman for Sinn Féin said the party did not operate the group. One of the administrators is a party activist who campaigned heavily for Cavan TD Pauline Tully in the general election this year.

“There is an onus on social media platforms such as Facebook to tackle this type of content, which is clearly unacceptable, and in violation of their own standards. We have contacted Facebook to make it clear that Sinn Féin has nothing to do with this group and that they should remove it,” a spokesman for the party said.

The group is named “Sinn Féin” although it describes itself as an unofficial supporter’s group and says it has been in existence since 2013.

Fianna Fáil Senator Malcolm Byrne earlier this year complained about the group to Sinn Féin TD Eoin Ó Broin when it was previously more accessible to the public before it became secret later in the summer.

Mr Byrne said the group contained comments that are “homophobic and racist and others target refugees” and he called on the party to take action in August.

Man jailed for assaulting his infant child and ex-partner 17:51
A further 25 deaths and 566 new Covid-19 cases reported by Nphet 17:54
Colder than average winter officially over, Met Éireann says 17:44
Man in court charged over firework incident at anti-lockdown protest 17:42
Seanad voting rights case asked: ‘Is there a constitution in the world without oddities?’ 17:37