Aodhán O’Ríordáin of the Labour Party concedes defeat at the Dublin Bay North Count in the RDS as Tommy Boughan, Finian McGrath and Denise Mitchell are elected. Video: Bryan O'Brien 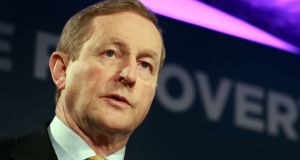 Taoiseach Enda Kenny says his party will “formulate a set of principles that will guide Fine Gael participation in a future government”. Photograph: Nick Bradshaw/Irish Times

At a glance: 156 out of 158 seats have been filled, 39 out of 40 constituencies complete and there was a 65 per cent national turnout.

Fine Gael will put a framework in place in which it will discuss a number of policy areas such as housing, taxation and water charges, Minister for Agriculture Simon Coveney has said.

Fianna Fáil has said water charges and the abolition of Irish Water would be a major issue if it is support a government.

“We need to take on board, within reason, what they are looking for,” Mr Coveney said of other parties and groupings.

Taoiseach Enda Kenny has committed Fine Gael to engaging with other parties to discuss the changed circumstances that have arisen following the election.

In a statement, Mr Kenny said that despite the disappointing outcome of the election Fine Gael was determined to play its part in providing the Irish people with a Government committed to working on their behalf.

“We will engage fully and inclusively with other parties, groups and independent deputies to ensure that such a Government is established,” he said.

“In consultation with our elected representatives, we will formulate a set of principles that will guide Fine Gael participation in a future government. These principles will take account of the issues of concern that were highlighted and prioritised by the Irish people during the election campaign.

“We look forward to discussing these and other ideas with the other parties and groups in a new Dáil that reflects the changed circumstances following the election,” he said.

Mr Kenny said the Fine Gael parliamentary party “formulate a set of principles that will guide Fine Gael participation in a future government”.

“These principles will take account of the issues of concern that were highlighted and prioritised by the Irish people during the election campaign.”

Some Fine Gael ministers are now understood to be open to the idea of a rotating taoiseach, if Fianna Fáil are to enter into Coalition.

The Anti-Austerity Alliance People Before Profit (AAA-PBP) party now have six TDs, the same number as the Labour Party, after Bríd Smith was elected to the final seat in Dublin South Central.

Congrats to Denise, Richard, Finian, Seán & Tommy.
So proud of our campaign, our party & our values.@labour #dubbn pic.twitter.com/0CQ1498JhY

Speaking after deputy returning officer Alice Lanigan declared her elected, Ms Smith said the Labour Party should no longer be part of the trade union movement.

She also said the AAA-PBP would hold Fianna Fáil to their promise to abolish water charges.

Ms Smith was confirmed as the new TD when Fianna Fáil’s Catherine Ardagh conceded after a marathon three-day recheck of the votes in the Dublin constituency.

A recount is continuing in the four-seat Longford-Westmeath constituency, the last to declare in the general election, and a crucial contest for Labour in particular.

If outgoing Labour TD Willie Penrose fails to hold his seat Labour will lose speaking rights in the Dáil as the party will fall short of the seven-seat threshold.

The recount follows a request by outgoing Fine Gael TD James Bannon who was as few as two votes behind Penrose after the last count, according to party sources.

Mr Ó Ríordáin said he was a victim of the huge anger that existed at the junior coalition party.

“The tide was out. People made a very clear decision they did not want the Government returned,” he said.

He said Labour was on the back foot for five years and it was difficult to progress.

“Today is the first day of the comeback. Ireland needs the Labour party an our value system. I absolutely believe we will recover from this and we will have better days again.”

The outgoing TD said he was concerned for the social issues he attempted to progress including repealing the eighth amendment, recognition of Travellers’ rights and reforms in drugs legislation.

“We took on challenges that were not popular - things like drug reform, traveller rights, working to try and change the direct provision system. I wouldn’t spend any less time on those things if I did again,” he said.

Mr Ó Ríordáin was joined by Minister for the Environment Alan Kelly as the results came in.

He said now was not the time to discuss the leadership of the party but members would decide that when they meet later this week.

Mr Ó Ríordáin lost his seat to Sinn Féin candidate Denise Mitchell. Independents Finian McGrath and Tommy Broughan, who had looked in difficulty over the weekend, made a comeback to retain their Dáil membership in the closely fought five-seat constituency.

Of the three candidates, Mr Broughan was elected first, then Ms Mitchell and finally Mr McGrath, all three without reaching the 12,271 quota.

Mr Ó Ríordáin had tears in his eyes as he hugged campaign team members and there were tears among many of his supporters.

Mr Ó Ríordáin and his wife Áine Kerr and family members posed for photos and joked with the media as they waited for the result to be announced.

Praising the three winners he said they were great candidates, great politicians and would make a great contribution to the new Dáil.

Fine Gael’s director of elections Brian Hayes said the party “probably underestimated” the unpopularity of the Government going into the election.

He said he was very disappointed with the outcome and particularly disappointed that some colleagues had lost their seats. He told RTÉ’s Seán O’Rourke programme he accepted full responsibility for that.

“We’re still the biggest party. We have a lot of new TDs, we have ten women TDs and we also had some successes in Dublin and elsewhere, but I am very disappointed [in the outcome] and I accept full responsibility for that,” he said.

“We need to assess what happened in the campaign. The Taoiseach has some strong views on what we have to do to assess the campaign,” he said.

Asked whether the campaign was too Dublin-centric, Mr Hayes said that would be a “fair assessment.”

Fianna Fáil leader Micheál Martin has taken the first initiative since the inconclusive election result by making a pitch for major political reform before the new Dáil meets tomorrow week.

With a minority government of some kind the most likely outcome, Mr Martin’s move is designed to ensure a substantial shift in power from Ministers to ordinary TDs in the new Dáil.