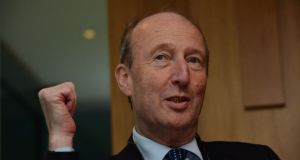 Mr Ross was the only Minister to argue against Mr Kenny taking part in the annual event at the White House at Tuesday’s Cabinet meeting. He said his objection was due to the new president’s views on torturing prisoners.

Mr Trump has said torture “absolutely” works in tackling organisations such as Isis and also that the US must “fight fire with fire”. He has also been criticised for introducing a ban on people from seven Muslim-majority states entering the US and freezing refugee arrivals.

Minister for Finance Michael Noonan told the Cabinet meeting it was in Ireland’s national interest for the Taoiseach to go to the White House. Minister for Social Protection Leo Varadkar said Mr Kenny should use the trip to raise concerns about human rights and stand up for liberal values.

Mr Kenny has been repeatedly urged to boycott the annual St Patrick’s Day celebrations in Washington but has said he would be attending.

“We have had great influence in the US over the years and we still have that influence. And we intend to use it,” he said on Monday.

Speaking in the Dáil on Tuesday, Mr Kenny said he would raise Mr Trump’s travel ban when they meet. He said he would not write to the president in advance, “because I intend to visit him in the Oval Office and say my piece publicly, both before and then’’ .

“I think president Trump is well used to disagreements and, obviously, is going to have many more in the times ahead,” Mr Kenny said.

He told the Dáil he had already said publicly it was not correct to ban travel on the basis of country, nationality or creed. He said the issue was not just about visits to the US president, adding there was a long established tradition in the links between the two countries.

Mr Kenny said he would not object to an all-party motion condemning Mr Trump’s action on immigration, as suggested by Fianna Fáil leader Micheál Martin, if there was agreement on it.

Sinn Féin leader Gerry Adams said he was up for an all-party motion if there was agreement. It was disappointing, he said, the Taoiseach had yet to raise the matter with the US administration.

Earlier, Anti-Austerity Alliance TD Paul Murphy said the Taoiseach would be complicit in the policies imposed by Mr Trump if he visits him. He alleged that Mr Kenny would not use the opportunity to express Ireland’s opposition to the measures being introduced by Mr Trump.

He claimed the meeting would be used by both leaders to express their admiration for one another and to discuss relations between the US and Ireland.

“Does anyone really believe Enda Kenny is going to stick it to Donald Trump?” he asked. “Is Enda Kenny going to go in and say you are a racist and dangerous man? The reality is he will go in and be tame and be craven. No message in reality will be sent.”

Labour leader Brendan Howlin said that if Mr Kenny travels he must set out a clear and principled position on Mr Trump’s policies.

Mr Howlin said Mr Trump would not listen to dissenting views, pointing to his decision to fire the acting attorney general Sally Yates for not implementing his immigration policies.

“He doesn’s hear anybody but that does not mean we shouldn’t articulate the view,” Mr Howlin said. “In a way I am challenging the Taoiseach even if it means that Donald Trump will cancel the formal visit. Let Ireland take a stand on principle.”

Mr Kenny said there was full support for retaining the US pre-clearance facility at Ireland’s airports at the Cabinet meeting earlier.

He said no person was vulnerable to be deported from Ireland. If somebody was turned back at a pre-clearance facility in Shannon or Dublin, when looking for refugee status, they were dealt with under Irish law.