Fiscal watchdog to warn about overheating the economy 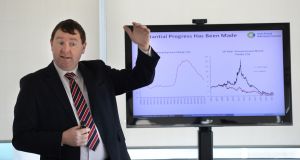 The Fiscal Advisory Council, the Government’s budget and economic watchdog, will tell an Oireachtas committee today that Minister for Finance Paschal Donohoe has a “window of opportunity” that he should use to pay down debt and make the economy more resilient to shocks in the future.

University College Cork economist Seamus Coffey, chairman of the independent body, is due to appear at the Oireachtas Budgetary Oversight Committee to brief TDs and Senators on the advisory council’s budget warnings.

Mr Coffey will strike the cautious note that characterises many of the council’s documents. “While the immediate outlook is favourable, negative shocks will inevitably occur in future. There are clear downside risks over the medium term: Brexit, US trade policy and the international tax environment to name but a few,” he will say.

He will also warn that while the economy continues to grow strongly, improvements in budgeting have “stalled” since 2015, when the then Fine Gael-Labour government introduced a strongly expansionary budget in advance of the 2016 general election.

“While the economy has experienced a strong recovery, this has not translated into any notable improvement in the underlying budget balance, taking into account improvements driven by the cycle ... Allowing for the estimated effects of the cycle, the structural position would appear to have deteriorated since 2015,” Mr Coffey will say.

The council reiterates its warnings about Ireland’s high debt level. “Ireland’s debt burden is still among the highest in the OECD and the burden is understated by standard GDP comparisons,” Mr Coffey will warn.

He will also warn that there is “no case for additional fiscal stimulus in 2019” beyond what is already planned for.

Because of measures already announced by the Government and committed to in last year’s budget, which have a cost of about €2.6 billion, there is limited room for manoeuvre in this year’s budget, which is currently targeted at €3.5 billion. The council will warn the Government against exceeding this figure. “Anything more expansionary is not likely to be appropriate,” the council warns.

The warnings from the Fiscal Advisory Council will be echoed by the ESRI, which is also attending the committee. In particular, the ESRI economists will warn that significant tax cuts in the budget would run the risk of overheating the economy, as happened before the financial crash.

“Given the very strong economic performance at present, it is imperative that fiscal policy does not risk overheating the economy. Given the clear need for increases in capital expenditure . . . and ongoing pressures on current spending, it is difficult to see scope for significant tax cuts without adding to the risk of overheating,” the ESRI will warn the committee.