‘We were happy to accept either convergence, no divergence or regulatory alignment,’ says Varadkar 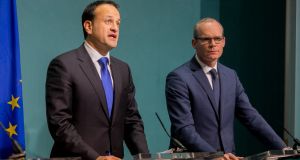 Taoiseach Leo Varadkar has said he is “disappointed and surprised” the British government was not in a position to conclude an agreement it had reached on avoiding a hard Border after Brexit.

Speaking at a press conference in Government Buildings on Monday with Tánaiste Simon Coveney and Minister of State European Affairs Helen McEntee, Mr Varadkar said the UK had agreed a text that met Irish concerns on a hard Border.

Mr Coveney said “the deal was done” between Ireland, the UK and the EU before British prime minister Theresa May asked for more time.

“The Taoiseach and I are absolutely at one on this,” he said. “We had a deal today in relation to a wording that, in our view, would provide the assurance for many people who were concerned about the potential re-emergence of a Border on the island of Ireland.”

Ms May’s hesitancy came after Arlene Foster, the leader of the Democratic Unionist Party, which supports the Conservatives in a confidence and supply agreement in London, raised objections.

However, neither Mr Varadkar nor Mr Coveney would be drawn on whether they were confident that Ms May had the DUP onside before promising to do a deal.

Mr Varadkar said there “are other parties too” in Northern Ireland which have different views from the DUP, and added that most people there voted to remain in the EU at the 2016 referendum.

“While they are the largest party, they don’t represent the majority of people in Northern Ireland. We need to remember there are other parties too,” Mr Varadkar said of the DUP.

“My objective now is to get this agreement concluded. I don’t think it would be in anyway helpful for me to comment on the party politics of the United Kingdom. ”

He added that the Government was not open to changing the agreement in any way that altered its meaning, although he said phrases could be changed.

“Not in any way that changes the meaning,” he said. “It is the meaning of the text that always mattered.”

Government sources said that because the shape of the agreement was now in the public domain, with the Opposition leaders and Cabinet Ministers briefed on its outline, anything less than a similar outcome would be deemed a failure.

A number of terms had been considered for inclusion in the text that would effectively mean Northern Ireland remaining in the European customs union and single market.

“We were happy to accept either convergence, no divergence or regulatory alignment,” Mr Varadkar said. “All those things essentially mean the same thing.”

Mr Varadkar also said there was no “hidden agenda” in the Government’s position, adding that Dublin did not “want to see a border in the Irish Sea anymore than we want a border between Newry and Dundalk”.

The Taoiseach said he trusted Ms May, who faced “many challenges and I acknowledge that she is negotiating in good faith”.

Mr Varadkar said there was a wording that provided an assurance that there would be no hard Border “as an unintended consequence”, a reference to a “no deal” Brexit outcome.

It is understood that the passage of the agreement the Taoiseach was referring to was the following: “The UK remains committed to protecting North-South co-operation and a guarantee to avoiding a hard border. The UK’s intention is to achieve these objectives through the overall EU-UK relationship.

“Should this not be possible, the UK will propose specific solutions to address the unique circumstances of the island of Ireland. In the absence of agreed solutions, the UK will maintain full alignment with the internal market, customs union and protection of the Good Friday Agreement.”