DUP leader Arlene Foster addresses the media on Brexit, saying that her party has made clear that "Northern Ireland must leave the European Union on the same terms as the rest of the United Kingdom." Video: Reuters 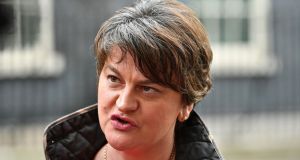 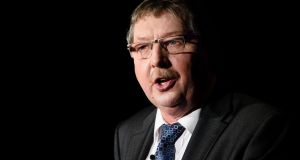 The Democratic Unionist Party has warned it will not countenance a Brexit deal which “separates Northern Ireland economically or politically from the rest of the United Kingdom”.

On Monday, following reports the British government was close to agreeing a deal with the European Union that would allow for continuing regulatory alignment in customs and trade practices across the island of Ireland, DUP leader Arlene Foster said Northern Ireland must leave the EU on the same terms as the rest of the UK.

At a press conference at Stormont and in a subsequent statement to address the detail of the leaked text of draft documentation on a deal to allow movement to the next stage of Brexit talks, Ms Foster said British prime minister Theresa May’s government, which her party is propping up through a confidence and supply agreement at Westminster, fully understands the DUP position.

‘Spoke to Ms May’

“We want to see a sensible Brexit where the Common Travel Area is continued, we meet our financial obligations, have a strictly time-limited implementation period and where the contribution of EU migrants to our economy is recognised in a practical manner.”

About 20 minutes after making her public statements, Ms Foster spoke to Ms May by telephone. DUP objections to a deal on regulatory alignment, plus final arrangements on EU citizens’ rights and the role of the European Court of Justice in any post-Brexit transition period are all thought to have contributed to the subsequent announcement by European Commission president Jean-Claude Juncker in Brussels that “it was not possible to reach a complete agreement today”.

Mr Juncker and Ms May have agreed to hold further negotiations before the end of this week, with the latter saying she is “confident we will conclude this positively”.

Taoiseach Leo Vardakar has said he is “surprised and disappointed” the British government was not in a position to conclude what was agreed on the Border on Monday but would not be drawn on finger pointing or attributing blame.

‘No economic or territorial divergence’

DUP Brexit spokesman Sammy Wilson MP accused the Irish Government of being “a bunch of political chancers” and of “doing their best to undermine the unionist position”.

He also suggested Mr Varadkar was trying to “pursue his own republican agenda”.

Mr Wilson said the British government had made clear the UK will leave the EU in its entirety and is committed to no economic or territorial divergence.

Former UUP leader Lord David Trimble described the Border proposals as “a thoroughly bad idea”, and present UUP leader Robin Swann said they would be “wholly unacceptable and would fundamentally alter the relationship between Northern Ireland and Great Britain”.

However, Green Party leader Steven Agnew said “the provision would avoid the need for a hard Border” and SDLP leader Colum Eastwood said the DUP “must move to act in Northern Ireland’s interest, not simply serve the their own interests”.

Sinn Féin Northern leader Michelle O’Neill wrote on Twitter: “After the day that’s been in it, nothing changes – we need to see special status for the North; that includes remaining in customs union and single market.”

Sinn Féin MEP Martina Anderson said special status for the North in the EU would provide the best protection for the Belfast Agreement and the rights of citizens. “We cannot have a situation where a minority are allowed to trample over the rights of the majority in the North who voted to remain in the EU,” she said.