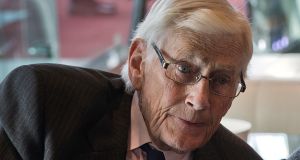 Seamus Mallon: “‘Cash for ash’ scheme just tip of an iceberg which has been in many ways rotten to the core.” Photograph: Brenda Fitzsimons

An independent judicial inquiry into the “corruption” in the Northern Ireland Executive might serve to move the current political crisis along, former deputy first minister Seamus Mallon said.

Mr Mallon said the ball was now firmly in the court of both the Irish and British governments to resolve the situation in a way that was compatible with the Belfast Agreement.

On Monday, Martin McGuinness resigned as deputy first minister in protest at First Minister Arlene Foster of the DUP’s refusal to temporarily step aside pending an investigation into the so-called “cash for ash” renewable heat scheme.

Northern Secretary James Brokenshire, who was meeting political parties at Stormont on Wednesday, has indicated that he has accepted the inevitability of Assembly elections.

Speaking on RTÉ Radio’s News at One, the former deputy leader of the SDLP said the “corruption” that had been there “right down this last 10 or 12 years” had now manifested itself in the renewable heat scheme.

“I don’t want to waste everybody’s time enumerating them; this is just the tip of an iceberg which has been in many ways rotten to the core, which has been tolerated by the British government and, if I may say so, dealt with very mutely by the Irish Government,” he said.

“We must be aware of that and I advise all political parties in the North to realise that that’s what it is. I can’t see any way that in effect there could be and would be a type of movement if in effect any element of the Good Friday Agreement was to be reduced or was to be ignored.”

It was “not just a matter of what party might be offended by this, that or the other”, Mr Mallon said.

“It is a matter that you simply cannot now exclude the Irish Government from the process of obtaining a resolution of this, if a resolution is possible.”

If a resolution was not possible then, he said, it was a case of the “old cliché” of going back to the drawing board.

The Belfast Agreement was also a contrivance because it was not possible to have the type of “normal politics” where people respected each other.

“It simply is not going to be possible in the Northern Ireland that we have as of now. If anything, Sinn Féin and the DUP have proved that,” Mr Mallon said.

“They have proved in many ways that electorally we are not ready for democracy, and the ball is now in the court of the two governments to ensure that what happens here is done in a way which is absolutely compatible with the objectives of the Good Friday Agreement, with that international binding agreement which was made by two sovereign governments.”

Homeless man paralysed after falling under bus settles case for €2m 15:54
Half of people surveyed say red zone travellers should not be allowed into State 15:23
Northern Ireland passes ‘sad milestone’ of 1,000 Covid-19 deaths 14:42
Some 27 animals seized after garda led operation into farm 14:26
Residents in centre for autism had to stay in bedrooms ‘for own safety’ 13:59