Leader Colum Eastwood says party is building for next generation, not next election 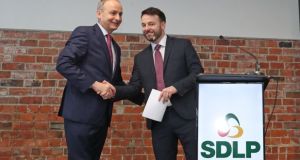 The SDLP at a special closed conference in Newry on Saturday voted by 121 votes to 53 to endorse the recently announced partnership with Fianna Fáil.

Delegates at the conference in the Canal Court Hotel in Newry voted on two motions with the party leader Colum Eastwood who proposed the motion supporting the alliance with Fianna Fáil carrying the day with 121 votes or 70 per cent of the poll.

A total of 53 delegates supported the counter proposal from the SDLP’s Lurgan branch. That motion affirmed the party’s “long established relationships with Fine Gael and Labour as well as Fianna Fáil” and called on the leadership to “continue to engage other parties of democratic Ireland in a policy focussed partnership addressing reconciliation between our island’s main traditions, as well as economic, social and cultural matters and the restoration of the Good Friday institutions”.

The main driver of the Lurgan motion was Claire Hanna, notwithstanding that she is Assembly member for South Belfast. SDLP grandee and former minister Brid Rodgers, who is from Lurgan, also spoke against the partnership.

It is understood that Ms Hanna was the only one of the party’s 12 MLAs to vote against the link-up with Fianna Fáil. She said she would not be resigning from the party.

Mr Eastwood, welcoming the outcome, said party members left the conference room together. “We are going to face the council elections and any other elections that might come our way as one team. We are looking forward to developing a partnership with Fianna Fáil but we are also very, very committed to fighting for the people of the North and the whole of this country,” he said.

“We are faced with a very real challenge with Brexit coming down the tracks. We have had no government in this place for more than two years. It is about time that our politics got back on track. This party, every single one of us is totally committed to doing that job, and we look forward to doing it together,” added Mr Eastwood.

He said it was not easy when people held different views but that was the democratic history of the SDLP.

Asked did the vote represent the first step leading to a merger with Fianna Fáil Mr Eastwood replied, “What we have agreed today is a policy partnership to try to deal with the very real problems – the crises that are in our politics today – that’s what people will see. It is two parties working together for the betterment of this country.

Mr Eastwood said the SDLP realised it had a “huge challenge” in restoring party fortunes. “But I think people understand in Northern Ireland that politics does better, that people do better when the SDLP do well. We are not pretending this is a quick fix. We are not talking about building for the next election, we are talking about building for the next generation,” he said.

“That is the work that we are recommitting to today. It is a hard slog. It will be a lot of hard work,” he added. “It is time to see a change. We are committed to making that change, we are looking forward to rolling our sleeves up, to getting round the doors and to working together to make sure we can see that happen,” added Mr Eastwood.

South Belfast MLA Ms Hanna said she entered the conference, which began at 11am, believing an exclusive relationship with Fianna Fáil was a bad idea and at the end of the conference, at 4.30pm, she had not changed her mind. She said the meeting was “inspiring” in that it prompted delegates from the youth generation to the founders of the party to air their views.

Ms Hanna said she understood the problems facing the party but still opposed the outcome. She hoped Mr Eastwood would have heard “the wide range of positive alternatives” from the floor and articulate some of them in future party policy.

Ms Hanna said she would be remaining on as an SDLP member. “We are all together in this party and we all have elections to fight, and we will do that,” she said. Ms Hanna was less explicit when asked would she stay if ultimately the party merged with Fianna Fáil although she recently said she could not be a member of Fianna Fáil.

The Irish Labour party, which Ms Hanna and others in the party support, said it was disappointed by the result. “It remains our view that this move represents a precursor to a full merger. We also note that 30 per cent of delegates opposed the leadership motion,” it added.

In Europe the SDLP is affiliated to the Party of European Socialists. Labour appeared to suggest that this formal relationship now could be challenged.

It said, “The consequences of the partnership decision will now be carefully considered by the Labour party in the coming weeks, and in consultation with our colleagues in the Party of European Socialists.”

“The Labour party remains committed to supporting those who wish to maintain Labour politics and the social democratic tradition in Northern Ireland,” its statement added.