Referendum on voting rights for Irish abroad due in autumn 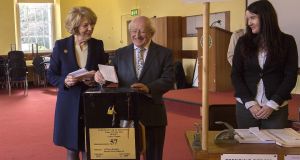 A referendum to extend voting rights in presidential elections to Irish citizens living outside the State will take place in the autumn.

It was initially thought the referendum would take place in May but it will now take place on either October 25th or November 1st.

A Government source said of the decision not to hold the referendum earlier: “We want to win this referendum but Brexit means our system is very focused on everything that a “no deal” or extension of article 50 could throw up. This referendum is going have high profile debate and will need a strong campaign so the decision has been taken for the autumn.”

Later in the Dáil, Taoiseach Leo Varadkar confirmed that Brexit contributed to the decision to delay the referendum. He said the poll would have been held along with the local and European elections.

Mr Varadkar said the referendum campaign could be complex and the Government wanted to make sure that there was a “good campaign” on the issue.

Delaying the referendum until later in the year would give the Government more time to prepare and prepare the groundwork for the vote.

The Taoiseach added that there would be a “better chance of getting it passed” with more time to prepare.