Children’s hospital: Call for Robert Watt to appear before committee 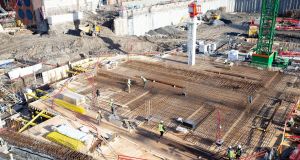 A view of the construction site of the national children’s hospital.Photograph: Tom Honan/The Irish Times.

Robert Watt, the secretary general of the Department of Public Expenditure (DPER), is to be asked to appear before the Dáil Public Accounts Committee to answer questions about the national children’s hospital overspend.

Seán Fleming TD, chairman of the Oireachtas public spending watchdog, said Mr Watt would be invited to “discuss the management and control of major capital projects,” including the new children’s hospital.

The latest €450 million overrun in the project, now expected to cost €1.7 billion, has created a significant political controversy.

Previously, Mr Watt refused invitations to appear before the Oireachtas health committee to answer questions on the hospital overspend.

Mr Fleming said the PAC would frame the request as an invitation for Mr Watt to discuss “major Government contracts,” which would ensure he “shouldn’t refuse.”

Committee member and Social Democrats co-leader Catherine Murphy said Mr Watt’s input would be “necessary to understand the process,” around the procurement and spending controls of the project.

Labour Party TD Alan Kelly said it was “absolutely necessary” Mr Watt answer questions on the increased hospital project costs. “I suspect he wants to in many ways come in at this stage to some committee,” he said.

Mr Kelly said another “unbelievable aspect” of the debacle, was the Department of Health had requested a meeting with DPER officials on the overrun in late October, which did not take place for over a month.

On 17th October last, health department officials made a formal request for a meeting on the escalating project costs, according to responses to parliamentary questions from Mr Kelly.

However a meeting on the major spending overruns did not take place until 23rd November.

A spokeswoman for DPER said a meeting was arranged as soon as a report on the overrun was received from the hospital development board. The board’s report was sent to the department on Monday November, 19th with the meeting taking place at the end of that week.

The committee later heard from Department of the Taoiseach officials, on the department’s 2017 accounts.

Martin Fraser, department secretary general, said the cost of the IBRC commission of investigation would be “north” of €20m.

The ongoing commission was set up in 2015, to look at transactions from IBRC, formerly Anglo Irish Bank, which resulted in a loss to taxpayers of over €10m. The following year the terms changed to focus on the 2012 sale of Siteserv to a company owned by businessman Denis O’Brien for €45.5 million, with a write-off of €110 million in loans.

At the outset the initial cost estimate was in the “single millions,” Mr Fraser told the committee.

The costs had risen “because it has taken far longer than people thought at the time, and it has become far more complicated,” Mr Fraser said. The department had no role in how the inquiry was run, and had “no choice but to sign the cheque,” he said.