Reforms could lead to 300-fold increase in slot machine limit 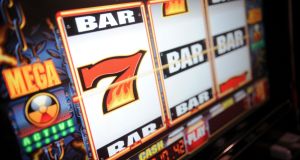 Reforms could lead to a 300-fold increase in the maximum stake allowed for slot machines. File photograph: Jacob Kepler/Bloomberg

Reforms of a 50-year-old gaming Bill currently before the Oireachtas could lead to a 300-fold increase in the maximum stake allowed for slot machines.

The current 3 cent maximum stake for gaming machines has been unchanged since the Gaming and Lotteries Act became law in 1956. The stake, and the payout limit of 50 cent, are widely seen as anomalous and have been flouted for years by amusement arcades.

However, concern has been expressed that the proposed increase of the limit to €10 for each stake, and a new maximum payout of €750, will exacerbate an already serious problem with gambling addiction in Ireland.

This provision of the new legislation was strongly criticised by two Independent Senators, David Norris and Gerard Craughwell, when the Gaming and Lotteries (Amendment) Bill, 2019, was debated in the Upper House last month.

“They are enormous and vast increases. From 3 cent to €10 is bad enough, but from 50 cent to €750 clearly raises this situation beyond the question of gaming for amusement,” said Mr Norris.

An organisation which provides services to problem gamblers strongly criticised the change as “extremely worrying”.

Barry Grant, chief executive of Problem Gambling Ireland, said that even with the nominal 3 cent limit, his organisation has already dealt with numerous people who went into arcades and casinos with their week’s wages and walked out a few hours later with nothing.

“How much more quickly will they lose a week’s wages at €10 a spin in a market that is unregulated and has a history of zero enforcement?” he asked.

Minister of State in the Department of Justice David Stanton, who is behind the new Bill, said the stakes set out in 1956 were “completely unrealistic” and needed to be brought up to date.

He said that other gaming offers, including bingo, scratch cards, and lotteries, already offered much greater stakes and prizes.

He added he was “open to discussion and debate” about the appropriate maximum stakes. Fianna Fáil and Sinn Féin have welcomed the legislation.

The new Bill is the first part of wider reforms of gambling laws, which will see the establishment of a regulator’s office within two years. Mr Stanton said the new law will enforce a minimum age of 18 for all gaming and lottery games. It will also give the Minister for Justice powers to increase or decrease the maximum stakes up and down.