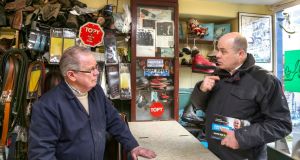 Denis Naughten, Independent candidate for the Roscommon-Galway constituency, speaks to Willie Burke in his shoe repair shop, during his canvass in Ballinasloe. Photograph: Joe O’Shaughnessy

Rural decline has badly hit the large town and locals are not shy about raising it when they meet the former minister for communications.

“You have to be very brave to start a business in this town,” Mr Burke tells the TD who served as a Fine Gael politician for years before going it alone.

Another shopowner in the town was particularly angry. “Towns are dying all over,” the woman tells Naughten, pointing at her largely empty store as an example of the issues plaguing small towns.

Meanwhile, employment is the main election issue for Mike O’Brien, who works in a pub in Ballinasloe. “We lost a couple of factories a few years ago. We’ve bounced back a bit, but we never fully recovered,” he says.

While there was plenty of frustration about rural decline, healthcare and jobs on show in Ballinasloe, there was little evidence of hostility or aggression towards Naughten. Indeed, many locals greet him like an old friend.

In places, pedestrians go out of their way to greet him, always a good sign for a politician in search of votes: “I knew your dad well,” one passerby says, referring to the late Fine Gael TD Liam Naughten, who died in a road traffic incident in 1996.

“I think you’re great,” local woman Mary Murray tells him when he canvasses at her house. Naughten had once helped a relative with a pensions problem. “He fought and fought. He is genuinely a very gifted man,” she says.

But it was not all plain sailing for Naughten. One man, standing outside a pub on the town’s Main Street, questioned him on the lack of beds in Ballinasloe’s Portiuncula hospital. A 50-bed ward is expected to break ground soon, promised the TD.

“I hope that’s not a canvassing promise,” the man replies. “You’d want to get something done with this country.”

His Independent status in the Dáil is a plus, for some: “Independent, is it? I think that’s the way to go,” says Rose, who declined to be identified further, and described Naughten as “very articulate” and “mature”. “He didn’t fall from the sky,” she adds. “His father was a politician.”

The closure of the psychiatric hospital, St Brigid’s Hospital, in 2013 is brought up by many. For decades, it offered help to people with mental health conditions and those facing addiction, as well as providing steady jobs to locals.

Even in a town which has a problem attracting new people to live in it, homelessness is raised: “It’s a very big issue. I’m in Galway and Athlone a fair bit and I see people on the side of the street and it’s just shocking,” says social care student Joseph Burke (21).

“There doesn’t seem to be anything done at the minute. The numbers seem to be rising and rising, and there are kids on the street,” he says. Replying, Naughten says he is in favour of vacant properties being brought onto the rental market.

Naughten made national headlines 15 months ago when he resigned as minister for communications amid a controversy surrounding meetings with a bidder for the National Broadband Plan.

However, the issue is of little interest in Ballinasloe, where local matters dominate.

Reflecting on that time, Naughten said he felt that he “didn’t have any other choice” but to resign in 2018.

“I felt really aggrieved that the Taoiseach did not give me the opportunity to have the inquiry carried out by [auditor] Peter Smyth, and let whatever decision had to be made be made at that stage.”

Once tipped as a future leader of Fine Gael, Naughten leaves the door very slightly ajar when he is asked if he could ever see himself returning to the Fine Gael fold.